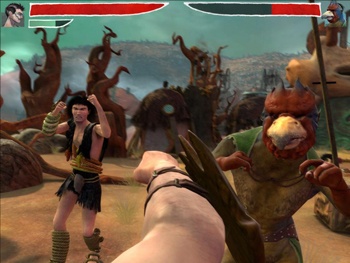 The virgin effort of indie game developer ACE Team, Zeno Clash is a hybrid between a traditional fighting game and a first person shooter. As one would expect, most of the game's game play involves brutal and fast-paced hand to hand combat from a first person perspective. Despite the occasional opportunity to engage in more "traditional" gunplay Zeno Clash is in no way your average FPS, and anyone going into the game expecting it to be will either be pleasantly surprised or very, very disappointed.

Zeno Clash closely follows the story of Galt, a man who comes from what is possibly the most warped and unconventional family dynamic imaginable. Galt is one of the many children of the Father-Mother, a hermaphroditic monster-being who does double duty as both the patriarch and matriarch of the most powerful and influential clan in the city of Halstedom. As the game begins Galt is fleeing from both the city and his pursuing family members who have accused him of murdering Father-Mother. With his friend Deadra in tow, Galt proceeds to put as much distance between himself and his family as physically possible.

The story of Zeno Clash isn't especially memorable. Much of the story is told through Galt's flashbacks to events that happen before the game starts that ultimately leads up to his confrontation with Father-Mother. Regardless of whether what is happening is either past or present tense in relation to the timeline most of the story is told through cut scenes. The only time the game really lets you have control of Galt is when there is a pressing need to fight someone. Very few things about the game's setting or characters are ever explained. For example, the game never actually explains who Deadra is or anything about her relationship with Galt. The game vaguely implies that they are close friends or maybe even lovers, but nothing else. A sheer lack of elaboration makes it hard not only to care about Deadra as a supporting character, but any of the characters or even the story itself.

Despite these few shortcomings, where Zeno Clash really shines is the combat. Not only does the game shift a traditional brawler to a first-person perspective, it does it well. Attacking and blocking is both simple and very fluid, making it easy to take the fight to the enemy. Seeing everything from Galt's eyes makes the combat both intense and very jarring, especially when you're being thrown around like a rag doll from one part of the map to another. Every blow and impact feels like it has a weight to it, conveying not only the power behind every punch but the pain that accompanies it. Combining this atmosphere with multiple enemies attacking you at a time gives the game's brawls a frantic pace and a sense of pure savagery that is very easy to get lost in. The game does on the odd occasion pull away from its main strength and instead relies on more traditional FPS shooting, but in most cases it only seems to hurt the experience. For example, there is one short section of the game has the player shooting at random attackers while traveling on a boat downriver that seems otherwise pointless and could have been left out. Even so, moments like this are few and far between, and the majority of the time the player is forced to defend themselves up close and personal, just the way it should be.

The art style in Zeno Clash is outlandish and bizarre. Many of the characters themselves are incredibly striking and memorable, several of them being horrendous-looking hybrids of man and animal. The world that the characters occupy and the creatures that they share it with are designed with the same unique and fantastic vigor. The game itself manages to be both beautiful and surreal both at the same time.

Zeno Clash is fairly short - the single player campaign will take somewhere in the range of between three to four hours to complete. To increase the game's playability, Zeno Clash comes with a "Challenge Mode" alongside the main campaign. Challenge Mode places the player into a tower where he must fight and defeat the game's enemies to advance upward to the next floor. Successfully fighting to the top of the tower and defeating its boss wins the challenge and a score based on the player's performance is then posted on a communal scoreboard. This scoreboard compares the completion time and scores of anyone on the player's friend's list in Steam as well as any members of any groups that the player is a part of. There are five different "levels" in Challenge Mode, each one each one being more difficult and challenging than the last. On top of that the game does come with a small suite of Steam achievements that are achieved by completing tasks both in the single player campaign and Challenge Mode. It isn't much, but it does make the game experience longer.

Bottom Line: The game is short and is somewhat crippled by a lackluster story, but the visuals and the combat experience more than make up for these shortcomings.

Recommendation: The combat alone makes this game worth playing, and at a price of only $20 on Steam it's worth every dime.