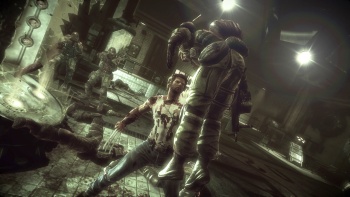 Be warned, bub: I'm not like other people. Call it a condition, a mutation or merely an affectation. I actively seek out videogames based on stoopid Hollywood movies, those hopelessly compromised rush-jobs designed to squeeze maximum profit out of a license while piggybacking the studio's panicked marketing blitz. These titles are rarely fun to actually play, but it's fascinating to see developers attempt to stretch a two-hour movie into a 10-hour videogame, extrapolating throwaway celluloid moments into entire levels or junking the original script in favor of their own fevered blockbuster ideas.

It's especially excruciating when the actual movie stars are involved, presumably under contract. (I didn't believe Robert Downey Jr. could deliver a boring line reading until I played the clunky Iron Man game - obviously RDJ found targeting a succession of anonymous shield generators as tedious as I did.) Often, just seeing their million-dollar faces ineptly rendered in potato-ish 3-D is enough to make me giggle and keep on playing.

So I wasn't just hoping that X-Men Origins: Wolverine (Uncaged Edition) would be bad. I was praying it would be really, really bad, so I could tear it to bloody ribbons with my adamantium claws of criticism - more snark than "snikt." As you probably know by now, the movie is flabby, drab and weirdly uninvolving. Perversely, the videogame is significantly better than the source material. (At least in its brutal "Uncaged" incarnation; I haven't man-danced with the cuddlier Wii, DS or PS2 versions.) Which, if you stop and think about it, is sort of a miracle.

The mention of "origins" in the title doesn't necessarily mean "original," though. Developer Raven Software has taken elements from various third-person brawlers, most notably God of War, and created a streamlined action game with a well executed combat system. As Wolverine, you can pull off a range of up-close slicey-dicey moves with those wicked claws and construct on-the-fly combos of lightning-fast slashes, charged attacks and critically-timed one-hit kills. While there's a satisfying depth to your moveset, it remains intuitive - unlike many similar titles, there's no need to pause the game to remind yourself what button sequence does that cool spinny move. You can level up certain special moves to even more berserk levels, but you're refreshingly lethal from the get-go.

Crucially, a targeted lunge will catapult Wolverine towards distant opponents, giving you enough aerial mobility to effectively micro-manage the gun-toting hordes thrown at you. You can really mess these guys up - ripping footsoldiers completely in half, turning shotguns against their alarmed wielders, wrenching off cybernetic arms to use as effective bludgeons - but they dish it out too. Your impressively-modeled (and generally shirtless) Jackman avatar routinely has most of his skin flayed off by enemy gunfire and machete strikes, only for the wounds to magically close up over time - the franchise's signature special effect. (Wolverine's mutant healing factor also provides a rare convincing excuse for a recharging health bar.)