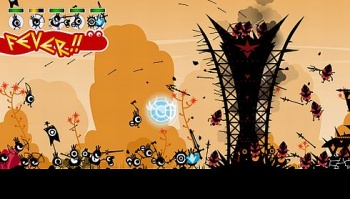 What's with all the Complicated in my rhythm game? You may find yourself asking this question about three hours into Patapon 2 when you're trying to decide which evolutionary path you'd rather take one of your 30 or so walking eyeballs, aka Patapons, before battle. Will you go for a lumbering brute, with the in-game diameter of a giant squid eye, who has many hit points and is fairly resistant to stun and environmental effects or will you choose to evolve into an agile although altogether more frail eyeball? Maybe you'd like to create an ocular cavalry man instead, but to do so you need some more ore, and it's off to play a rhythm on a giant rock baby's toes. Welcome to the world of Patapon 2.

The Patapon series, for those of you who missed out on the first game, like me, is an unclassifiable mix of dungeon hack, side scrolling real time strategy and rhythm game. The basic premise is that you lead around a clutch of walking eyeballs by tapping out rhythms on the PSP face buttons. These rhythms are used to order your troops to do things like march, attack, defend and dodge. It's also these rhythms that the player uses to guide his Patapons to victory in each level, usually through some combination of marching, attacking and defending at strategic times. Of course the closer you keep to the rhythm while doing this, the more emphatically the game's music plays and your troops attack or defend. It's a pretty neat premise that makes for an entertaining twist on two seemingly incompatible genres.

Patapon 2 can seem like a black hole of complexity, which isn't really a condemnation, but something to note for those expecting a pure rhythm based game. You will spend a significant amount of time replaying old levels to gather resources to evolve your troops(yes, there's an evolution tree for the multiple classes of troops) and collect new loot. There's plenty of customization for all of the new classes, types of Patapons and even special Hero-pon that have special attacks and abilities. You can even pick the individual weapons your troops are equipped with. There are also several mini games at your Patapon base camp that help you towards making a super party. It's a game of modifiers and stat adjustments and if you're into that sort of thing you'll feel right at home with Patapon 2. In that sense, it shares a lot in common with JRPGS, SRPGS and almost any other Japanese role playing game in which the grinding is a central gameplay element.

In terms of strategy and level grinding, Patapon 2 is as interesting as any other game featuring that kind of mechanic. Where it flounders about is as a rhythm game. Key to a good rhythm game are the songs, and Patapon 2 really falls short in that department. I don't think it's merely a matter of musical preference either. The game's songs are strange little tunes, children's songs really, that are eventually drowned out by the drum beat of your commands and the child-like chants of the Patapons. When your fever meter, a measure of how well you keep to the beat that also determines how effectively your troops execute their commands, is at its peak the game basically ends up sounding the same at every stage. The best rhythm games make the music and game play feel inseparable, and at times when you're really hitting the beat in Patapon 2 it feels that way. However, I never had a burning desire to replay a level just to experience the song associated with it.