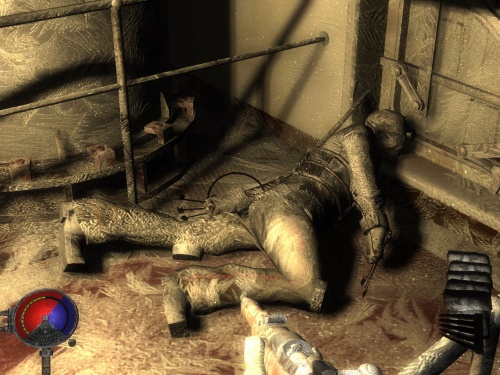 The following review was written by a member of The Escapist community. For more information on community reviews, please see this forum thread

Cryostasis: The Sleep of Reason is a justifiable piece of art, created with little money, but plenty of love by Ukranian developer Action Forms. I'd been looking forward to it for a long while: All of this "Russian BioShock" talk makes it easy to be intrigued. And while this equally ambitious and bizarre game may have the creepy atmosphere, glistening visuals, and beautiful plotline as advertised, it is, in fact, not a shooter. Cryostasis is a first person survival horror game, for better or for worse.

The game is set on The North Wind, a nuclear icebreaker, that crashed in 1968. Players enter the game 13 years later, in 1981, and assume the role of Alexander Nestorov, a meteorologist tasked with figuring out mysteries of the North Wind. The concept is all well and good, but the plot takes awhile to get going. The main punch isn't thrown until nearly the ending, so for most of the game the story is more "mysterious" than it is substantial or satisfying. Ultimately this is fine, because the final fourth of the game ties the whole story together; with the last encounter being way too awesome to spoil. Just make sure you're paying attention to the [seemingly-lackluster] beginning, because past events are often referenced. There are even a few different endings to add some replay value.

Cryostasis' magnificent tale unfolds via notes left behind by the original captain with cinematic flashbacks to 1968. At one point, you'll be walking through the frozen sleeping area of the crew, when a flashback reveals the actual crew of 1968 resting All of this makes the North Wind feel like a real place. However, Cryostasis is an extremely linear game. Linearity isn't an inherent problem, but in this case, it is a tad constricting. Cryostasis has an original setting that is begging to be explored, but you're never given the opportunity. The "vibe" of the North Wind is great, but there is too much repetition from level to level.

Right from the get-go, Cryostasis flaunts this atmosphere and goes the whole nine yards to try and scare you. It really does have most of the trimmings survival-horror fans are accustomed to. However, it lacks the "jump out of your seat" element that others have in the genre. Cryostasis is mostly eerie, not scary -- there is a difference. It's clearly trying to go for psychological scares, but after the fifth or sixth repeat scare-tactic, enemies become more bothersome than frightening.

Horror elements aside, Cryostasis' gameplay is an invariable checklist of "unique concept; poor execution". As an example, take the single most interesting idea found in Cryostasis: "Mental Echoes". Mental Echoes require Alexander to enter dead bodies and relive their final moments of life, usually to better his circumstances in the present. Mental Echoes are more like extended cinematics than puzzles. You have to fix something, but it's usually obvious what needs to be fixed. More troubling than anything else is that Mental Echoes are poorly paced (i.e. fight with monster, small environmental puzzle, mental echo, repeat), and consequently, can become monotonous. If nothing more, playing as the dead crew adds narrative depth, in that their deaths feel more personal.