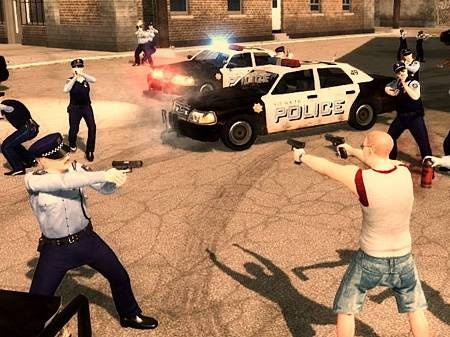 The problem with a lot of open world games is that they are immediately compared to Grand Theft Auto. When this genre of gaming become more and more popular, things become tough for the lesser known games in the genre. A good example of this is Saints Row by Volition. The game was originally released on the Xbox 360 a few years back and was instantly targeted as just another GTA knock off even though it was actually pretty different. The game sported a bright city to explore, plenty of different activities to complete, and a story that was a throwback to movies such as "Boyz in the Hood" and "Friday."

Saints Row 2 picks up a few years after the original, beginning with the protagonist comatose in a prison hospital. After escaping from prison with the help of a new friend, you find out that Stillwater has changed since you last walked its streets. It is now your job to take back the streets and once again rule the city by killing everyone who stands in your way.

Like the original, players are given the opportunity to create their very own character. Not only are players given the option to create a male character, but they can now choose to play as a female character. The addition of the female sex in Saints Row 2 is somewhat puzzling because the original game required players to create a male character. It doesn't make any sense to have the main character suddenly become a woman when considering the overall storyline, but there was nothing that the fans wanted more than to play as a female character. Sure, playing as a woman does screw with the continuity of the connecting storylines, but it also shows that Volition listens to their fans.

Stillwater is just like you remember it from the original game, but even bigger and better with more of just about everything. Volition pulled out all the stops to deliver a bright, violent and surprisingly colorful environment for the player to run around in. Everything from the skyscrapers down to the trailer park looks genuinely cartoonish, while retaining the right amount of realism. Stillwater is the complete opposite of many other open world environments; choosing a very bright, silly, unrealistic look over a dark, gritty, realistic look. The game is a breath of fresh air in the claustrophobic open world gangster genre of games, ditching most of its realism in favor of a cartoon-y look.

The gameplay mechanics are pretty simple and straightforward, but those same mechanics can get in their own way from time to time. The driving controls are simplistic, but the driving physics are loose and laughably bad, which means that your car will rarely drive straight. I can't tell you how many times I have tried to drive down a straight road, only to hit anything and everything between me and my destination. Thankfully, the shooting mechanics fare much better, allowing players to kill dozens upon dozens of faceless thugs without ever breaking a sweat. Unfortunately for those faceless thugs, their artificial intelligence detracts from their overall challenge making them more like cannon fodder than ruthless thugs.