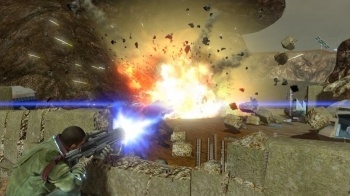 Cracking open surprise 2007 hit Crackdown and distilling the special blend of ingredients that made it so excellent is no easy task. Case(s) in point: inFamous and Prototype. Both games nailed the city-shaped playground, over-the-top superheroics and, of course, gravity defying acrobatics that defined Crackdown, yet they still managed to fall short of the cult classic's lofty acclaim. So then, with no more heroes in sight, all hope is lost, right? Wrong. Enter Red Faction: Guerrilla, Crackdown's true successor not in superhuman looks, but in spirit.

Red Faction puts you in the boots of Jason Statham lookalike Alec Mason, a Normal Guy who came to Mars to make an honest living with his brother. But when the corrupt Earth Defense Force decides there isn't room enough on Mars for two Masons, Alec joins a rebel group known as the Red Faction in hopes of avenging his brother. As with Crackdown, much of Red Faction's story is inconsequential. The game quickly gives you motivation, a sledgehammer and a dream, then sends you on your way. Mason may be billed as the game's lead, but in Red Faction, the gameplay is the real star.

As a former miner, Mason knows his way around a sledgehammer. So well, in fact, that a sledgehammer in Mason's monstrously masculine arms goes through brick, steel and sometimes bone with force akin to that of a wrecking ball. It's a welcome ability, since developer Volition's much vaunted Geomod 2.0 technology allows you to destroy any and all buildings in the game, piece by mangled piece. As a result, you already feel like a badass the moment the game begins. With just a hammer, you can immediately traverse the game's open world and batter nearly anything into dust. Like jumping hella high in Crackdown, destructibility is the life of Red Faction's party. And again like Crackdown, Red Faction makes sure its centerpiece never gets boring.

Most Red Faction missions involve acting as the Big Bad Wolf to one structure or another, which might sound a bit repetitive. Thankfully, the game constantly provides you with new and interesting ways of huffing, puffing and blowing down the EDF's property, so tedium never really becomes an issue. Couple the abundance of constantly unlocked tools at your disposal with the environment's destructibility, and you have all kinds of options for accomplishing your missions. For instance, you could ramp an armored vehicle clean through the walls of an enemy barracks, hop out and hammer anything that looks vaguely sentient as soon as your bullet-riddled steed goes up in smoke, or you could plant mines around crucial structures and trigger the detonator when you're safely out of range. Or you can just find a mech and stomp about like a kid atop an anthill.

Granted, actually hoofing it to the beginnings of said missions can be a pain, since Red Faction's warp feature only allows you to teleport back to your home base. Thankfully, story missions aren't Red Faction's only method of progression. The game also contains an array of side-missions ranging from using select weapons to destroy something within a time limit to defending Red Faction bases. Additionally, many structures are marked as targets by the Red Faction, and demolishing such targets raises civilians' morale, increasing the odds that they'll assist you in battle.