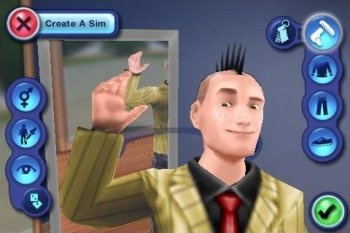 In my room there are two full bookcases jam-packed with games for every system released in the States since 1995. Adjacent to the bookcase is a closet dedicated entirely to storing games and gaming paraphernalia. My HDTV has six different consoles attached to it, and the table on which it sits also supports two PSPs, a Nintendo DSi and a custom-built gaming PC.

With all these options at my disposal, you'd think I'd have better things to do than play the stereotypically terrible games large publishers expel onto Apple's iPhone (most often as a clandestine advertisement for their more traditional, bigger-budget versions). Yet I recently spent an entire weekend curled up on my couch with the miniaturized version of The Sims 3, a feat that I consider the highest praise for a game whose quality isn't just surprising, it's damn near miraculous.

The iPhone version of Sims 3 is not simply a shrunken iteration of its PC/Mac brethren. While it shares the desktop version's aesthetics and general "run a tiny person's life, complete with bowel movements and romance" structure, it trades customizability for more varied gameplay. Unfortunately, you'll have far fewer character designs and clothing choices at your disposal than in the desktop versions, and the tools to customize your character's home are similarly stripped down. But what EA has added more than makes up for the loss of what are essentially superficial game mechanics.

Taking a page from any number of quirky DS titles, Sims 3 iPhone offers you a handful of mini-games representing your character's hobbies and essential life skills. Classic activities like cooking and repairing appliances are now accomplished by completing simple games of skill. To cook a meal, you must acquire the proper ingredients, place them all on your stove, then stir your pots as they come to a boil. Repairing appliances is a simple matter of pulling off defective components and replacing them with functional analogues.

New to the series are hobbies like fishing and gardening. Once you've acquired the necessary gear, you're given the chance to travel to the proper part of town and indulge in your chosen pastime. Fishing in particular is quite entertaining: By simply mimicking a fish's movement with your lure and reeling in at the proper time, you can accrue huge numbers of fish, all of which can be sold for a large profit. It's even possible to remain unemployed, subsisting entirely on the profits you earn from the fauna of your local lake.