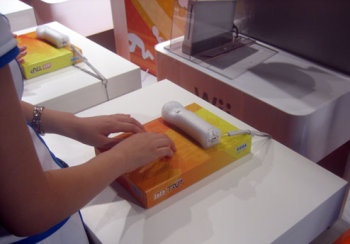 It is both an achievement and a failure that your first task in Let's Tap is the game's most interesting. Find a box, you're told - ideally a tissue box. Now place the Wii remote on top, face down. Don't move as it calibrates, and you're in business.

To its credit, Let's Tap refutes the claim that the Wii remote is a simple waggle stick. Its core mechanic lies in tapping the box to vibrate the controller by proxy. The controls allow for a surprisingly high level of precision, but the game seldom demands it. Instead, the mini-games of Let's Tap parse out every gesture into two or three levels of tap strength. Of these five mini-games, which can be played alone or with three other people, only one truly glorifies the concept of Let's Tap, and it's downhill from there.

Even the best mini-game, "Tap Runner," would work just fine with conventional controls. It's essentially a Track and Field clone - just the track part, that is - but with more obstacles. Instead of mashing buttons, players frantically tap their box to make the avatar move. The trick isn't in tap speed, but in rhythm. Calm, measured beats give the player a speed boost, and a hearty slap of the box triggers a jump, useful for hopping over hurdles, leaping through warp fields and hitting spring boards, among other obstacles.

Sure, all of this could be done with a set of buttons, or by holding the Wii remote and shaking it, but the box concept is alluring. I brought in my fiancée as a test subject, and she immediately took to the idea, demanding level after level of racing until there were no more. Then she asked to play again.

It's too bad the rest of Let's Tap doesn't hold that appeal. The second mini-game, "Rhythm Tap," is a drumming challenge, but it fails in practically every way. The music is unbearably cheesy Japanese pop, and the scoring system doesn't penalize the player for hitting extra beats, allowing for cheap, rapid-tapping exploits. As a multiplayer game, Rhythm Tap misses the opportunity for musical counterpoint, as every slap counts towards one giant tap meter. Additional players might as well be hitting the same box.

Rhythm Tap reveals some of the cracks in Let's Tap's control scheme. Tapping the box in rapid succession isn't always reliable, resulting in missed beats here and there. The Wii remote is also prone to moving around the box during play, especially without the suggested rubber grip (sold separately, of course). It's actually easier to just tap on the top of the Wii remote, ruining the "outside the box" illusion that creator Yuji Naka so delicately sets up.