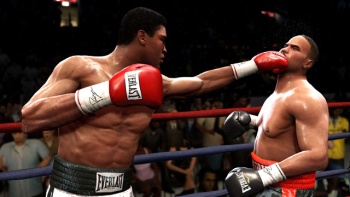 In the field of boxing videogames, the Fight Night series is still the champ. It's the polar opposite of Punch-Out!! thanks mostly to its authentic presentation and its novel control scheme, which has players throw punches with thumbstick gestures rather than button presses. The latest addition to the franchise, Fight Night Round 4, is smoother, faster and more realistic than any boxing game to date. But for these very reasons, and because of some other puzzling changes, Round 4 is actually inferior to its predecessor.

Anyone who's watched a real boxing match will immediately see the resemblance in Round 4. That's because the game doesn't exaggerate. Instead of the canned beat-'em-up punching sound effects of the last game, the blows in Round 4 are distinctly muffled, staying true to the actual sound of a gloved impact. Visually, boxers in Round 4 absorb punches more than in Round 3, so it's rare to see a torso contort in response to a sharp attack. And while the game lets the sweat fly, you'll rarely see any blood.

A couple of visual tricks aide this subtler approach: When you avoid a punch with a well-timed parry or dodge, the camera zooms in slightly, cluing the player in to a counter-punch opportunity. The resulting blow sets off a bright camera flash, amplifying the impact without relying on extreme body language. All of this adds up to an aesthetic that is more ESPN than Rocky V, but that isn't necessarily a good thing. The problem with Round 4 is that it can't decide whether it wants to be an ultra-realistic boxing simulator or a dramatization, as evidenced by conflicting design decisions throughout the game.

The addition of status bars to convey health and stamina is among the game's greatest missteps. While convenient, these meters remove guesswork at the expense of excitement. It's no longer necessary to pay close attention to a boxer's motions to determine if he's tired when the status bars provide a cheap workaround.

This conventional thinking carries over to the rests between rounds. Where the previous game demanded manual healing of your boxer's wounds, Round 4's healing system has you spend points, earned by performing well in a match, for health, stamina and cut recovery. You can prep your boxer to re-enter the ring in a matter of seconds, eliminating the frantic attempts at recovery that made Round 3's interludes so exciting.

Despite these drawbacks, Round 4's Legacy mode is an alluring feature - for offline players at least. After creating a boxer or choosing an existing one, you compete and train according to an actual schedule while the rest of the boxing world buzzes around you. Title belts constantly change hands regardless of your actions, and every year new phenoms replace old ones. It feels like your boxer is part of an actual ecosystem rather than simply grinding up to the title bout.