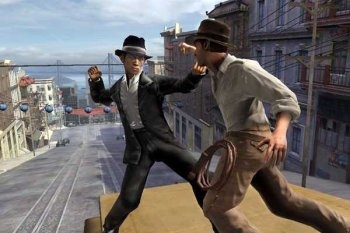 When Han Solo is faced with unwelcome questions, he tends to distract his interlocutor ("I don't have it with me"), then simply blast them. During the PR kerfuffle that surrounds a movie release, Harrison Ford adopts a different approach: he answers banal questions in a monotone so dull it saps the energy from all but the most demented celebrity hack. The once and future Indiana Jones only seems to perk up when he's discussing stunt work - his respect for stuntmen and what he describes as "physical acting" seems utterly genuine.

Ford would hopefully dig Indiana Jones And The Staff Of Kings, since its dominant gameplay mode is "old-fashioned brawl simulator." In its Nintendo Wii incarnation (it's also available for the PS2, PSP and DS) the game encourages you to swing enthusiastically with the Wiimote and Nunchuck; on-screen, Indy jabs, hooks and delivers exaggerated haymakers to a horde of stereotypical heavies. With only six punches and one counter-move, it isn't exactly Fight Night Round 4 - or even Punch-Out!! - but there are few things as satisfying as clocking a diabolical henchman on the jaw with a well-timed uppercut. Throw in some gnarly whip moves - strangling opponents, snapping weapons out of their grasp or activating context-sensitive takedowns - and it's great knockabout fun. One of the two character types is obviously based on that hulking Nazi engineer, so it's especially satisfying to crack him over the head with a dustbin lid.

When you're not busting chops, you're zig-zagging between Central America, San Francisco, Istanbul and Nepal, exploring and puzzle-solving along the way. The graphics obviously can't compare with modern descendants like Uncharted: Drake's Fortune or recent Tomb Raiders, but a combination of bloom effects, smoggy filters and convincing environmental clutter creates a respectably stylized atmosphere, aided by a lead voice actor clearly relishing the opportunity to channel classic Ford. Gunplay is limited to discrete interludes that are little more than shooting galleries, but they effectively break up the pace and benefit enormously from liberal use of Indy's signature revolver sound effect, which makes his faithful six-shooter sound like a cannon going off. The final section of each level mixes things up with short vehicle sections, including aerial dogfights, elephant-riding and motorcycle-and-sidecar chases that, while sometimes confusing, never outstay their welcome.