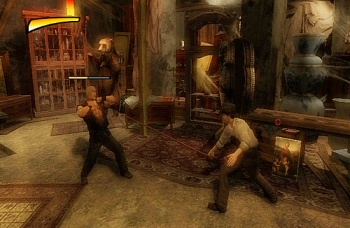 Staff Of Kings is set in 1939, which means Indy can face off against a familiar enemy. "Nazis! Why'd it have to be Nazis?" he mutters at one point, and this smushing together of two classic Indy quotes neatly sums up the game's approach: Rather than simply restaging beloved scenes from the existing films, it evokes them in new situations. For the most part, it works - who doesn't want to see Indy retrieve his fedora at the last millisecond, or go for his revolver only to discover that it's not there? - but the actual storyline feels rather muddled. It's only halfway through the quest that Indy realizes what sacred artifact he's supposed to be unearthing - the staff of Moses - and most of the supporting cast (including an aging mentor-in-peril and an Irish love interest) barely function as plot devices let alone well-rounded characters.

But if the point of an Indiana Jones game is to make you feel like Indiana freakin' Jones, Staff Of Kings does a decent job, even if one of the most effective filters applied to the game is perhaps external: the player's own nostalgia, constantly tickled by John Williams' heart-quickening score. After rattling through the story mode, you're encouraged to revisit levels to uncover more archaeological booty or perform achievement-esque tasks. (In a rather literal invocation of Indy's Temple Of Doom mantra, these extras are categorized as "fortune" and "glory.") There's also an eight-chapter two-player mode that pairs Indy with Henry Jones, Sr. - after a shaky start, it offers both a decent slab of co-op fun and a legitimate excuse to perfect your Sean Connery impersonation. ("You call thish archaeology?") And if you can't get enough of the brawling, there are standalone arena modes to perfect your streetfighting techniques.

Perhaps the game's greatest hidden treasure, though, is the inclusion of Indiana Jones And The Fate Of Atlantis, the point-and-click PC adventure from 1992 (only available on the Wii version). Refreshingly easy to unlock, it will hopefully herald a new wave of resurrected LucasArts games for Nintendo's console. If I'm being totally honest, though, it took this player a while to readjust to the gameplay rhythms of such a dialogue-heavy adventure. I'm perhaps more appreciative of the idea of including the game as a nod to Indy's gaming legacy than actually playing through it again. I guess I'm not the man I was 10 years ago ... but then, it's not the years, it's the mileage.

Bottom Line: True to the rollicking spirit of the franchise and put together with fan service in mind - Han Solo is an unlockable character! - this plucky game is a throwback in many excellent ways. Experienced players will breeze through it, though.

Recommendation: Should you get it? Derring-do.

Graeme Virtue is a freelance writer based in Scotland. You can attempt to follow his spicy eating habits at Trampy And The Tramp's Glasgow Of Curry.

This review is based on the Nintendo Wii version of the game.