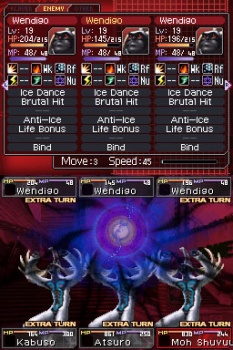 The Nintendo DS now has the market cornered on a bizarrely specific niche. If you're all about hip, headphone wearing kids in Tokyo who just happen to be caught in the middle of a seven-day long apocalypse, consider Nintendo's dual-screened portable your portal to a two-week dream vacation. See, The World Ends with You and Shin Megami Tensei: Devil Survivor both fit the above description with eerie levels of accuracy, and lucky for you, they're both great!

While the two games may share similar premises, however, they haven't cribbed any other notes from one another. Where The World Ends with You was a two-screened terror of an action-RPG, Devil Survivor is a far more manageable JRPG/strategy RPG hybrid. At first blush, battles look as though they've sprung from the same overly bounteous SRPG birth canal as every other rote SRPG that hits the shelves these days: grid-based movement, tiny, cute characters, more numbers than you can count - you know the drill. Actually engage an enemy in combat, however, and things get a little more refreshing.

Instead of depicting a quick clash between pint-sized brawlers, battles take place in a traditional JRPG format that looks most like a Dragon Quest battle screen. As expected, you then take turns exchanging blows with your foes, choosing between numerous physical attacks and magical abilities to forcefully remind your demonic enemies why hell wasn't actually all that bad of a place. Using this basic formula, you command multiple parties, each made up of one human and two demons. Between demons' preset skills and humans' ability to "crack" and learn whatever skill they'd like by defeating select enemies, strategic options are brilliantly layered, making the action of mixing and matching to create the perfect party incredibly addictive.

When not playing guardian angel to the godless heathens of Tokyo (who, oddly, can't stop stumbling into vaguely Christian apocalypses), you're free to explore the city through a minimalistic, highly functional set of menus very reminiscent of Phoenix Wright's. Different locations play host to all manner of events at certain times each day, many of them key to unraveling the multitude of tantalizing mysteries that surround the city's demonic invasion. For instance, over the course of a given day, you might overhear a conversation, walk in on a former pop diva's outdoor concert, thwart some gangsters, fight a whole mess of demons and talk with every conspicuously hip-looking person in Tokyo.