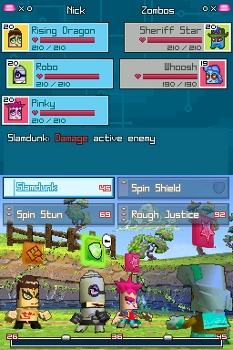 Zubo definitely possesses a certain "what the hell" factor. It's a game that's been marketed to kids, but it's not based on any pre-existing gaming franchise or movie tie-in schlock. It looks cutesy, but it's actually one of the more creatively designed and visually impressive games on the system in some time. It smashes together rhythm game elements and a turn-based RPG battle system - two things traditionally reserved for titles geared toward more hardcore audiences - with cushy adventure exploration in a way that's mostly clever and humorous. At the same time, you'll find fluff mini-games, a monster-battling collection element and tiresome fetch quests scattered about. Zubo clearly suffers from a bit of an identify crisis, yet this quirky mish-mash of styles and ideas surprisingly works in its favor.

You'll have to quickly get used to being the lone human around in the cartoonish and vibrantly colored world of Zubalon, where you're mysteriously thrust into the limelight and branded a savior. Upon arrival you're immediately recruited to help save the small-statured, fun-loving Zubos from their generally unfriendly, zombified foes, the Zombos. Don't expect a grand spectacle of a story to follow; this is one aspect of the game that was chopped down into easily digestible mush for the younger sect.

With up to three equipped Zubos in tow at a time (you can collect, level-up and train up to 55 of the critters in all), you'll embark on a lengthy journey meandering through all manner of silly-themed realms. Exploring, chatting with friendly Zubos, collecting hidden notes and searching for special items to unlock new areas and progress the story is about what you'd expect from a kid-friendly game. The challenge level increases in a relatively gentle manner, all controls are pared down to simple stylus gestures and the presentation stays light and bubbly. But despite its cheerful atmosphere, Zubo would quickly grow boring if it weren't for its peculiar hybrid combat system.

Running into Zombos milling about at key spots on the adventure map triggers battles that play out like a mix between a dance fight and Final Fantasy. In combat, your three equipped Zubos occupy one side of the field while your Zombo opponents reside at the opposite end. After exchanging menacing glances, each side takes turns going back and forth selecting a front-line person to unleash a spectacular attack that's delivered in-time to the music. Once you pick a Zubo and select from its available special moves, it will approach the enemy and act out one of many hilariously choreographed interactive fight scenes. At key points in your attack, a red outline appears around your character, and you must tap the screen in time to the rhythm right when an orange aura matches up with the outline. It's very similar to the rhythm gameplay in Elite Beat Agents. The amount of damage dealt depends on the type of move you're executing, the classes of the two characters involved in combat and your tapping accuracy.

There are actually a few other solid RPG elements woven into battles and other aspects of the game. Your Zubos come in three flavors of character classes, offensive, defensive and support, and operate under a Fire Emblem-like rock-paper-scissors triangle that determines how effective they are against certain enemy types. You'll recruit new Zubos with different personalities and special abilities. Their outfits - zombies, "Robocop," punks, rappers, shirtless kung-fu masters, etc. - are also pretty entertaining.

As seems to be the trend these days, there's a Pokémon-like feel to the task of collecting, training and equipping Zubos. They gain experience with each battle and level up, earning new outrageous powers to use against foes. These attacks range from kung-fu moves and busting out blasts of guitar rock to playing patty-cake and propelling victims into the air with explosive farts. While these maneuvers are often amusing and well thought out, the latter move is simply so ridiculous to witness I couldn't help but chuckle slightly the first time it cropped up. Then I felt embarrassed for being so easily swayed by such base potty humor. Shame on me.

Zubo's slapstick and occasionally scatological humor will likely be riotously funny to the game's intended audience. But then again, it's rather hard to exactly pin down Zubo's real audience, since the RPG and rhythm game elements are very tight, and the game has such an excellent visual style. Its more hardcore-attuned elements held up fairly well under my enthusiast scrutiny, even if the adventure does drag on to the point where battles start to become repetitive.

For a game that seems to be aiming for the younger crowds, Zubo is far more entertaining and versatile than meets the eye. It's a stylish adventure that's just creative enough to capture the interest of a wide range of players. It walks a delicate line without faltering too much along the way.

Recommendation: Players with broad gaming tastes will find Zubo's many flavors to be a mostly delicious concoction.

Nathan Meunier must now cleanse his visual palate with a dose of ultra-violence.