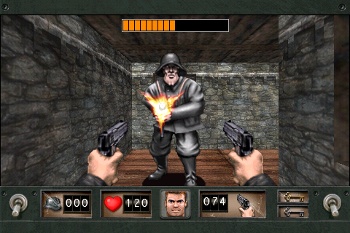 Even before Doom titillated PC gamers with droves of satanic space demons and the advent of graphic chainsaw dismemberment, the small band of renegade developers that created it seemed hell-bent on making waves in the gaming world. The original Wolfenstein 3D was highly controversial for its time and paved the way for much gaming depravity yet to come.Wolfenstein RPG is a much appreciated nod to the formative days of the first-person shooter genre.

You still play as the ill-fated Allied soldier B.J. Blazkowcisz, who's the leader of an elite squad sent deep into Axis territory to destroy the enemies' paranormal weapons research program and storm Castle Wolfenstein. Things don't go quite as planned; you get captured and have to Rambo your way through tight subterranean corridors filled with Nazi soldiers, flaming skeletal warriors, enraged chickens, leather-clad ladies and killer robots. The story scenario isn't fresh by any means, and that's OK. Making the bloody trek to the nefarious castle once again is a good time for many other reasons.

If the original PC game had a roll in the hay with Rogue, then Wolfenstein RPG would be their bastard love child. Rather than being an abomination, the game steals the best features from both parents, resulting in a polished and humorous amalgamation of two distinctly different styles of gameplay. On the surface, the first-person gameplay appears to function just like its action-oriented shooter brethren. Then the RPG dungeon hack influence kicks in, and the game becomes a very different animal altogether. You still trudge through 3-D environments with guns blazing, but the turn-based combat is far more strategic and deliberately paced. Every step or action your take advances a single turn in the current level. When you inevitably find yourself surrounded by enemy soldiers or their inhuman creations, you can't just instinctively run and gun your way through them. Everyone must mind their manners and take turns attempting to kill one another like civilized gents. This forces you to carefully weigh your options before taking action. It's a stark juxtaposition of ideals, and one that rounds the game out nicely.

Like old friends, other well-worn RPG elements crop up in various forms. You amass experience by slaying enemies, reading the unusual books you stumble upon and looting treasure from graves and other spots. Leveling-up automatically boosts your stats to increase your death-dealing potential. Exploring the maze-like dungeons and other locations step by step conveniently automatically maps them. Additionally, an experimental booster-shot system replaces the classic potions of dungeon crawlers long past. The Axis antagonists have conveniently left their research lying around for you to play with. Using chemistry stations found throughout the game, you can mix experimental, color-coded compounds into syringes and randomly inject them to produce powerful effects. All of this meshes seamlessly with the game's more traditional Wolfenstein aspects without trampling over them.

Wolfenstein RPG is both great to look at and to touch. The updated visuals have a stylish, cartoonish sheen to them that stays true to the vibe of the original games while also dialing the pretty up a few notches. It's a shame the same polish wasn't applied to the character animations, which are stiff and weak in comparison. Getting tactile with the iPhone's touch screen proves to be an effective and interesting means of exploring and slaying alike. An on-screen D-Pad makes moving and turning easy, and you can deliver punishing attacks, check the map and switch weapons with simple taps.

Warped humor, hidden secrets and clever references to many of id Software's older projects are woven throughout the fabric of the game. The tomes you'll find scattered around the levels are often chuckle-worthy. Books like Stay at Home Husband, Sacred Romance and Breathing for Birthing have negative effects, while works like Beer Making 101, Leadership Skills for the Feeble-Minded and Scrawny to Brawny boost your testosterone-laden stats for a short time. It's also entertaining to strap live TNT to a foe and watch them run around for a few turns before eventually erupting into flame. Then there's being able to repeatedly kick a live chicken to turn it into a fully-roasted, health-restoring meal. Yes, it's the simpler pleasures that make Wolfenstein RPG a truly amusing way to kill time while waiting for the bus.

Recommendation: Wolfenstein RPG is one of those titles that proves iPhone gaming does indeed have legs to stand on. Have an iPhone or an iPod Touch? Don't miss out on this one.