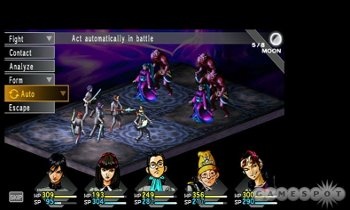 The original Shin Megami Tensei: Persona would never have seen a re-release on the PSP if not for the immense critical and financial success of Persona 3, Persona 3: FES and Persona 4. Those three games all rank in the top handful of roleplaying games on the PlayStation 2, and it could easily be argued that they are some of the best examples of the genre to ever hit retail shelves. Unfortunately, if you're purchasing Persona PSP hoping to find more of what you loved in Atlus' flagship series, be ready for disappointment.

Persona PSP is a product of the times - the times of 1996, to be exact. The world is navigated either by moving a generic cursor around a static 2D over-world map, walking through single-screen isometric rooms, or trudging through 3D, first-person dungeons one square at a time.
With the exception of those isometric rooms, which are generally item shops or other such locations,there's the constant danger of being drawn into a random encounter. Many will recall that this trope was pretty common in 90s-era games; only the developers of Persona seemed to really enjoy this mechanism. Feel lucky if you manage to take half a dozen steps without being assaulted by screeching harpies or demons with suggestive crotch appendages.

Unlike the navigation, the combat in Persona PSP is surprisingly ahead of its time. On the one hand, there's the annoying grid system which forces you to set your party up in a strict formation that best utilizes their attacks. While this does make controlling the combat a slightly more cerebral activity, there will often be battles in which only one or two of your characters can actually successfully hit opponents. On the other hand, you have the "Contact" system through which you can converse with your foes. The options range from Joke, Pontificate, to Dance, and if you choose the correct conversational options the villains can be convinced to leave you alone or give you cash or their demon cards.

Demon cards can be combined to create the series' titular personas -- characters taken from a handful of world mythologies that cast spells or attack on behalf of your characters, while also granting special statistical bonuses. Of course, if your attempts at chatting up the foe fail, there's the risk of enraging them or giving them certain advantages in battle. It's a lot like trying to explain to your girlfriend why you'd rather spend time with your friends than watch Sense and Sensibility with her parents: If you say the wrong thing your best move is trying to flee as quickly as possible.