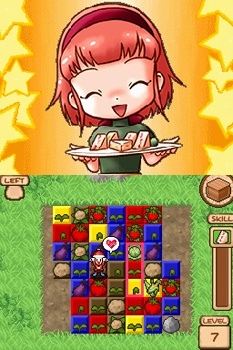 Harvest Moon: Frantic Farming (DS) is a puzzle game in which your goal is to harvest vegetables as efficiently as - hey, where are you going? Ok, pulling up tomatos might not sound as sexy as matching gems or lining up colored blocks, but hear me out on this one. It may have an odd premise, but Frantic Farming is a delightfully refreshing twist on the puzzle genre that's worthy of your attention, no matter how you may feel about turnips.

The first thing farming fans need to know is that despite having the Harvest Moon name, Frantic Farming doesn't have much in common with that series of games. While that's a lifestyle sim with sheep, this is a straight-up puzzle game that simply borrows settings and characters from that universe. The story, which is told from several different points of view as you work your way through the single-player mode of the game, goes something like this: Some strange force has caused all of the vegetables on Sunny Island to go haywire and grow out of control. The only solution is to harvest them as quickly as possible and....yeah, ok, the story doesn't make a whole lot of sense, to be honest. The dialog is awkward and the characters seem to have had a few espressos too many. The bottom line is, there are vegetables aplenty that need harvesting, so off to the fields we go!

And by "we," I mean "your friendly neighborhood Harvest Sprite" and your stylus. At the beginning of each round, you're presented with a field of vegetables in various stages of growth, but the Sprite can only harvest fully-grown produce. He'll water the surrounding area after he harvests something; anything he douses will gain one level towards full growth. If he runs out of fully-grown veggies to pluck, you lose. To keep him moving through the field, you'll have to arrange the veggies so that he's watering nearly-grown plants as he's plucking fully-grown ones. You can use the stylus to move the plants around the field as he goes, which not only helps keep him moving, but also allows you to set him up for big combos. Lining up several of the same kind of veggie, for example, will send your Sprite on a hopping harvest spree that will rack up serious points. Pulling up a golden veggie will clear all of that type in the field, netting you a huge score, and yanking extra large vegetables will net you even more points.

It's not just about constructing a perfect path for your Sprite, though. You're also racing the clock to achieve your goal, such as reaching a particular score or harvesting a requisite number of specific vegetables. You'll also have to contend with an ever-increasing number of rocks clogging your garden, but fortunately you can call in some help should things grow too dire. Harvesting veggies fills a meter that will call in an assist that's as helpful as it is ridiculous. The powerup varies depending on the character you're using; Mark's "Dog Rush" skill will fully grow everything on the outer rim of the garden, while Chelsea's "Chickens!" will explode all of the rocks on the garden patch and grow crops. I don't know about you, but I find it hard not to love a game that has a powerup called "Chickens!".

Playing through Frantic Farming's story mode unlocks new characters, modes, and extras, such as game art and score attack. It's worth playing through everyone's story to have everything available for you, though which character you use will likely end up depending on personal whim more than strategy. Though the challenge varies depending on the situation (say, playing a later stage in Adventure Mode or against a seasoned opponent), I never found one particular powerup to have a more obvious advantage than another. Be sure to take a break from the story to give Mission Mode a try, though; as its name implies, it gives you specific tasks to complete, like picking your favorite vegetables or clearing the field, and will definitely put your newly-acquired gardening skills to the test.

Bottom Line: Harvest Moon: Frantic Farming is chock full of weird, but its twist on the puzzle genre is inventive and refreshing.

Recommendation: If you enjoy puzzle games, Frantic Farming is certainly worth your while. Just don't try to make too much sense of it.