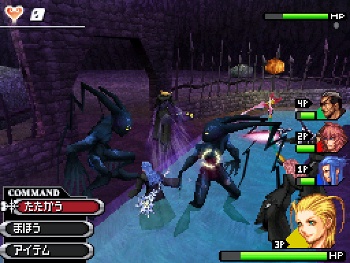 Roxas was my favorite part of Kingdom Hearts II. Sure, he took center stage during an agonizingly lengthy five hour tutorial, but as a character, he exuded a charming sort of sincerity, with just enough spunk to make his actions interesting. Sadly, just as his story kicked into high gear, he vanished - goofy checker-striped outfit and all. Heartbroken, I trudged on in Sora's gigantic sneakers, beat the game, and that was that.

If you're in the same boat as me, Kingdom Hearts: 358/2 Days might just, er, float your boat. The game's all about Roxas back when he wore a cool black cloak and committed nefarious deeds with Organization XIII. In fact, within just a couple hours of the game's thumping, Hikaru Utada-themed opening, you'll have beaten the Munny out of Heartless alongside the likes of Axel, Xigbar, Xion, and more!

If that all sounded like gobbledygook to you, then don't even bother with the rest of this review. For Kingdom Hearts newcomers, 358/2 Days' plot is nearly as impenetrable as its title. It's not bad, though! It's just badly paced. The story's dribbled out between missions, but - in keeping with Kingdom Hearts tradition - the first few hours are something of a slog, with truly compelling events functioning as oases in the proverbial desert.

Once the game opens up and allows you to start selecting missions, however, things get a bit more interesting. While many missions fall into a predictable "Find and eradicate X number of Heartless" pattern, there's a surprising amount of variability throughout - especially once you factor in challenge missions, which, though tough nuts to crack, contain the best prizes.
It should also be mentioned that single-player missions can be replayed in a cooperative multiplayer mode, provided you can sniff out each level's multiplayer unlock icon thingamajig, which isn't too difficult. Even better, co-op lets you don the hooded garb of other Organization members - each with their own stats and fighting styles.

In addition to keeping the game from turning into a garden-variety hack 'n' slash, varied mission structure forces you to keep a close eye on your - pardon my unexplained jargon - panels. Which is a good thing. See, the panel system takes the typical Kingdom Hearts formula and injects it with a heaping dose of customization. In short, panels control every aspect of your character. Level up? Insert your new +1 level block into your panel grid. Find a new type of Keyblade? Snap it into the panel. Hell, you can't even block or roll without proper paneling.
Now you're probably thinking, "Hold the phone! This sounds awfully similar to Kingdom Hearts: Chain of Memories' frustratingly inelegant card system!" Well, you're wrong, fortunately. The panel system may be at the heart (hur-hur) of even the simplest of Roxas' actions, but instead of ultimately limiting your combat abilities, it enhances them. The panel grid is constantly expanding, so you'll never really be left hurting for extra block space. As a result, you're encouraged to try out all manner of strategies, and all the while, mission intel not-so-subtly winks and nudges you into rearranging your blocks to suit the task at hand.

Also of note are the game's controls, which - despite the lack of any sort of analog stick - function quite competently. Combos are simple, one button affairs, and zapping enemies with some of that trademark Disney magic is as easy as holding down the L button while attacking normally. The traditionally troublesome Kingdom Hearts camera's problems should be especially compounded by the DS' hardware limitations, but - while it takes some getting-used-to - refocusing its wandering eye every once in a while eventually becomes second nature.

If there's one thing that's likely to send even the most dedicated Kingdom Hearts fans into fits, though, it's 358/2 Days' blatant recycling of Kingdom Hearts II's worlds and music. Even worse, in-game areas - though rendered quite beautifully considering the DS' D.O.A. 3D graphics capabilities - feel deserted and lonely. NPCs are few and far-between, and strolling through Disney worlds devoid of Disney characters is much akin to buying a DVR so you can skip TV shows and give your undivided attention to all the commercials. That is to say, it simply misses the point.

Aside from that, though, 358/2 Days is a fine footnote in Kingdom Hearts' legacy. And while it's certainly not going to take home any awards, it's still a solid game. If you're craving some more hot Square Enix-on-Disney action and are mortified by the fact that Tetsuya Nomura's still working on Final Fantasy Versus XIII, Kingdom Hearts 358/2 Days is a great way to pass the time.

Bottom Line: Kingdom Hearts 358/2 Days is a solid action-RPG with an engrossing (though sometimes slow-moving) plot and enjoyable co-op multiplayer. Just don't get too down when you knock on the door of your favorite Disney world and no one's home.

Recommendation: Buy it if you're a Kingdom Hearts devotee. 358/2 Days will give you plenty of bang for your buck. If Kingdom Hearts has never been your cup of tea, though, this game won't change your mind.

Nathan Grayson almost bought a Roxas action figure once. Then he realized that Roxas was already technically inside his Sora action figure, and decided his money would be better spent elsewhere.