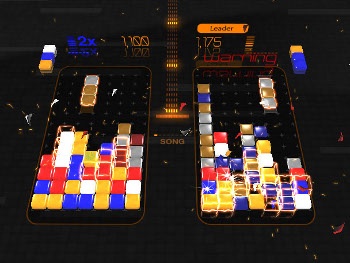 Groovin' Blocks is Tetris set to a beat - it's a fast-paced, rhythm based game where your one and only goal is to drop blocks to the beat of the music. Unfortunately for me, I'm tone deaf and have two left thumbs, so dropping anything to any sort of beat is a bit of a challenge. Thankfully, Groovin' Blocks makes it really easy to get into the groove.

The set up is simple: the player begins with a grid, and blocks will drop from the top of the grid and can be placed below. These blocks are comprised of three different colored squares, all of which can be shuffled. The goal is to line up three blocks of like colored squares, either vertically or horizontally, and make them go "poof!" As long as your herd of blocks doesn't reach the top of the grid, you're golden.

The difficulty comes in with the rhythm portion of the game. On each side of the grid are scrolling markers. When a line hits the marker, it marks a beat in the background music, and that is when the player would (hopefully) drop the block into place. Think of Guitar Hero or Rock Band, but without so many buttons - there's only one scrolling beat, and all you have to concentrate on is dropping your block once the beat hits its marker. Sometimes there will be brightly colored beats - if you drop your blocks when that hits the marker, you get extra points. There are other ways to gain extra points - special blocks can be unlocked through gameplay, and placing blocks on the beat multiple times will create score multipliers.

Groovin' Blocks was originally a Wiiware game, but its creators, Empty Clip Studios, have officially released it on disc. There are various difficulty levels that are accessible from the beginning, but you'll have to successfully play through different levels in order to unlock other levels and different types of blocks.

The music is a decent selection of electronica, and the beat varies throughout the song, so keep paying attention to the scrolling markers. While you're coasting through an easy beat, the song may abruptly change into something more fast-paced and you'll need to quickly alter your playing to drop the blocks on the new beat.

Although it may seem complicated at first, even those cursed with a lack of the musical gene will eventually be able to get the hang of it. As you play, you'll find your foot unconsciously tapping in what is, most of the time, corresponding to the beat markers scrolling across the screen. You naturally find the beat, and the game begins to become more intuitive than challenging. Once you get to that point, Groovin' Blocks is insanely addictive, and that's where the difficulty levels come in. The higher the level, the harder the beat is to keep up with. If that doesn't suit your fancy, co-op and multiplayer modes are available as well. Overall, Groovin' Blocks has decent gameplay, decent music and that's enough for me to give it a huge thumbs-up.

Recommendation: Groovin' Blocks is challenging enough to be fun, but easy enough to not be intimidating.

Bottom Line: Buy it. It's a good game to have on hand at a boring party or with a group of friends.

Lauren Admire is getting her groove back.