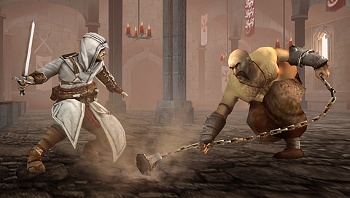 The original Assassin's Creed was so ambitious; so uncompromising in its scale and vision, that "next-gen" consoles could barely heft its weight. The result? An uneven experience, and a handful of thumbs-downs from a fair number of critics. Yet here we are two years later, asking Sony's puny PSP, with its creaky, PS2-era innards, to achieve what the Goliaths to its David could not. And so, by all logical accounts, this should be the part where I absolutely ream into Assassin's Creed: Bloodlines, leaving it torn and bleeding in a bargain bin with so many other failed PSP conversions.

I'm happy to report that Bloodlines is, by and large, a good game. Now, it's not a game-of-the-year contender dark horse or anything like that, but it did keep me fully enthralled from beginning to end, which is more than I can say for the original Assassin's Creed.

The game picks up shortly after Assassin's Creed's ending, more or less. Desmond's nowhere to be found in Bloodlines, so don't expect the game to tie all of the original's dangling plot threads into a neat bow. Instead, Bloodlines' plot feels like a section of decent, but ultimately inconsequential fluff that was cut from the original; a director's cut type of deal that sees Altair return to Templar country for his dessert and a thin mint. Really though, between Altair's "cool," but mostly boring stoicism and a narrative that accomplishes very little in the grand scheme of things, the plot comes off as little more than an excuse for Altair to hop around killing people.

But that's not actually a bad thing! As those of you who've played Assassin's Creed probably know, killing's all that made Altair's first jaunt - or the playable bits of it, anyway - worthwhile. Fortunately, Bloodlines' developers were well aware of this, so unlike its predecessor, which might as well have been called Flag Collector's Creed or Amateur Pickpocket's Creed, Bloodlines makes no bones about your role as a relentless killer. In fact, aside from a few side missions, almost every mission in the game demands that you add at least one new body to your growing mountain of corpses - typically more!

Fortunately, the game does a pretty good job of dressing its stab-happy central goal with enough variables that you probably won't be distracted by the admittedly repetitive nature of its naked core. Toward the end of the game it becomes apparent that the developers either ran out of time or ideas, with a mish-mash set of story missions that force you to sprint around cities, picking fights with nameless goons for no real reason.