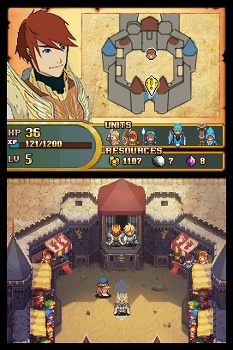 With only one month to go before the end of 2009, Ubisoft unleashed an A-list title sure to be remembered as one of the top DS games of the year...if enough people play it. Despite a heavy load of varied challenges, great characters and unreasonably addictive battles, Clash of Heroes may suffer more than it gains from its franchise prefix, Might and Magic. Unlike the title suggests, you don't have to be familiar with Might and Magic's lore. Heck, you don't even have to be a fan. You can hate it, love it or know nothing about it, and still fully enjoy this unique tactical RPG.

After a tragic introduction, the game tosses you into the role of Anwen, an Elvin hunter and one of the five orphaned heroes you'll play throughout the game. As each of these young heroes, you can pick up sidequests, purchase troops and wander about from one designated node to another in order to collect resources that, well, buy you more troops. And believe me, you will need more troops. They have an uncanny way of dying.

Then again, how many of your troops perish is all up to you and your whit. As commander, you direct a range of soldiers, all stacked into even rows and eagerly awaiting their inevitable deaths on the touch screen. Since the battles are turn based, you have three moves to manipulate your guys, using the stylus or the D-pad - your choice.

You can think of the battles as deadlier versions of Red Rover. Troops are not only attackers but also the main line of defense. If the enemy breaks through your troop's defense, your HP suffers. To make sure that doesn't happen, you command three types of soldiers that willingly stand in the way of you and certain death.

First, you've got the Core units. Each hero receives different types of Core units with varied abilities, but they're all pretty much the same. They're pawns, cannon fodder to block the way of oncoming troops or squeeze that last hit point out of your foe. Your goal is to stack them into a column of three of the same color, charging an attack. After one to three turns, they'll plow forward into enemy lines, either dying on impact or breaking through and tackling the enemy commander's HP. You can also squish 'em into a row of three or more, rather than a column, creating a nice wall of defense. Of course, the enemy can and will do the same.

Then there are Elite and Champion units, purchasable at their particular Unit Dwellings or given to you as you play the game. These guys are badass in combat, but hard to use. To charge an Elite unit, you place two Core soldiers behind him. Champions require four. But unlike the Core units, their abilities greatly differ and can seriously turn the tides of a battle. Say you're playing as Fiona, a dead human noble whose fall into the necromancer's world turns her into a not-so-dead-but-kinda ghost. Her Death Knights wield a mighty blow after six turns while her Dragons, which take one less turn, deal extra damage for every idle enemy they chew up along the way to the other side.

Of course, merely moving and stacking troops, no matter what awesome abilities they may have, would be downright boring. But, as commander, you've got a few tricks up your sleeve. For one, you can remove a unit, getting rid of that obnoxious blue guy smack in the middle of three perfectly stacked greens. You can also align like-colored troops to charge and attack at the same time, causing a link and increasing the damage dealt. So pretend you have a green Deer that takes four turns to attack. Diddle about for two turns with your other troops and then stack together three green archers, a unit that only charges for two turns. Viola, a link! You can also double up a charged unit, stuffing three of the same colored soldier behind another three. Viola, a fusion! This increases the troop's defense and strength.