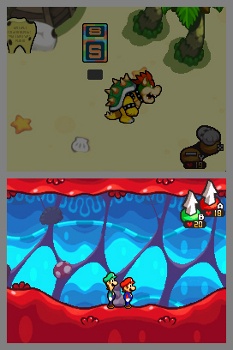 The inner workings of the iconic gaming villain, Bowser, serves as both the setting and plot device for Bowser's Inside Story, in which Mario and Luigi are accidentally swallowed whole by their reptilian adversary. The entire game takes place within Bowser's innards. Bowser becomes the unknowing accomplice of the plumber duo when Lord Fawful, the villain from Mario and Luigi: Superstar Saga, decides to take over the Mushroom Kingdom and acquire the Dark Star, a source of great power.

Fawful feeds Bowser a special mushroom that forces him to inhale the many inhabitants of Peach's Castle; this includes Princess Peach, Toadbert, Toadsworth, many other Toads, and most noticeably, Mario and Luigi. As the unlikely and unwitting hero, Bowser decides it's unacceptable for anyone other than himself to kidnap Princess Peach and rule the kingdom, so he sets out to reclaim his castle and stop Fawful. The brothers quickly realize that since their traditional foe also wants to prevent this new threat from acquiring the Dark Star, the best way they can fight Fawful is by helping Bowser. As long as Bowser doesn't realize who his mysterious benefactors are, he'll undoubtedly continue accepting their assistance.

Help proves to be quite necessary, as Bowser's bravado frequently lands him in situations he isn't able to handle on his own. Because he is so over-confident in himself and his abilities, Bowser is often incapacitated or unaware of the havoc his actions wreak on his body. These changes inside Bowser's body generally manifest as new areas that can be explored, or as mini-games that the mustachioed brothers must complete in order to power up or revive Bowser. So, anytime Bowser needs a bit of extra strength to push a statue, lift a castle, or stop a train, Mario and Luigi are able to jump, stomp, or hammer something inside Bowser's body to improve the physical abilities of the Koopa King.

The majority of the gameplay features Bowser on the top screen, while Mario and Luigi trek through his innards on the bottom screen. Though the Mushroom Kingdom and surrounding lands allow Bowser to roll, smash and burn his way through them in three dimensions, Mario and Luigi are relegated to 2D side-scrolling gameplay, though jumping on or punching an enemy is just the start of a battle that unfolds in turn-based fashion for both parties.

Combat requires constant attention - a well-timed button press will allow you to deal bonus damage or evade enemy attacks. Assailants have a bit of a giveaway: for example, lifting their right foot, which indicates when and where the attack will land. In a step above the typical RPG fare, the foes faced later in the game are not differentiated by a mere palette swap; instead they'll have brand new attacks with brand new quirks. Watching for that slight tell in an enemy's attack is a bit like trying to read opponents at the poker table, only your hit points are on the line instead of cold hard cash.

When a game puts a smile on your face, it's usually because you've overcome a difficult situation, obtained a piece of amazing gear, or gained a new ability. Bowser's Inside Story manages to cause a grin quite simply because it's charming from start to finish. There is an ever-present joyfulness that permeates all characters and situations. The writing brings out the personalities of each individual; from Bowser's misguided self-confidence, to Luigi's perpetual cowardice, to the Monty Bros as typical surfer dudes.

The features of the DS are used to great effect, like holding the system sideways for battles as giant Bowser, or selecting different troops with the stylus - but blowing into the mic to breathe fire is not clever, innovative, or fun. Between hidden special attacks, mini-games and collectibles, plenty of optional content is available, but completing the first couple side quests will demonstrate that they are so unrewarding that a desire to track down the rest is unlikely to manifest.

Mario, Luigi and Bowser have been around since gaming first entered the homes of a mass market audience. The transition of their original abilities and gameplay elements into RPGs has been impressive, but is at its finest in Bowser's Inside Story.

Bottom Line: The appeal of Mario and Luigi: Bowser's Inside Story is multifaceted. There are some minor flaws, but nothing can dampen the charm of this game that revels in its cheerful tone.

Joel Gifford had Mexican for lunch, and would really like Mario and Luigi to see what they can do about this indigestion.