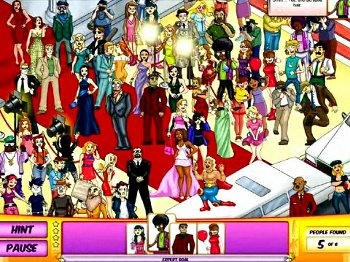 In Gotcha: Celebrity Secrets, you play as Gaby, a wanna-be Perez Hilton with a gossip column that doesn't feature any gossip! She is competing with her biggest rival, Dante. After procuring an anonymous industry insider, Gaby begins to uncover Hollywood's seedy underbelly, starting with the secret wedding of two of the hottest celebrities.

As Gaby, you must coerce your way into Hollywood's innermost folds and reveal the personal lives of the hottest celebrities to a rabid and waiting blogdience. To uncover the latest gossip, you'll first have to indulge in a quick "Where's Waldo"-esque person search. Unlike other hidden object games, you're not looking for items, you're looking for people - your possible "informants." In the beginning, the search is simple. A line of photographs at the bottom of the screen show the people you need to locate in a busy scene throbbing with people and events. Then, it gets interesting. Occasionally, you'll be asked to locate people based only on clues such as "wears a snorkel," or match them to a grayed out picture of their silhouette. Occasionally, items will appear on the screen that temporarily obscure your view; poker-faced bodyguards will try to prevent you from snapping a shot of a celebrity, or balloons during a festival will float slowly down the screen. In addition to the informants, you also have the option to locate bonus items: Gaby is often hiding somewhere in the scene, as well as other people of interest such as Carrie D'away and Johnny Rocker. Stars and clocks are hidden in the scene; with stars increasing your overall points and clocks adding extra seconds to the timer.

Once you locate all of the informants, you complete a quick mini-game to earn their trust and procure the correct information to follow your lead. These mini-games vary from reassembling a broken invitation, matching items, and even spotting the minute differences between two seemingly identical photographs. The mini-games break up the person-search which, although fun, can easily become a mind-numbing task. After each successful celebrity secret is revealed, Gaby is awarded with a total blog visitor count, which is calculated by the time it took to find all the items and complete the quest, as well as any optional items that were located. As you progress through the levels, your blog grows in popularity, and soon you're in the running to becoming the most famous celebrity blogger in all of Hollywood.

Although casual games are generally meant to be lighthearted and fun, Gotcha: Celebrity Secrets subtly showcases the gritty reality of those trapped inside the Hollywood dream. During one celebrity scavenger hunt, you learn that the latest "It" girl has lost a lot of weight. Following your leads, you find that not only has she been indulging in grueling workout sessions with a personal trainer, but has also checked into a celebrity weight loss hospital, where the main diet consists of a plate of tissues. Though certainly the point was meant to be tongue-in-cheek, it does immediately bring up images of the ever-increasing rash of skinny celebrities who seek out size 00 skinny jeans as if they were the Holy Grail. It's rare for a casual game to include subtle social commentary, but Gotcha: Celebrity Secrets manages to do so without becoming an overt diatribe on the Paparazzi-celebrity-gossip columnist triangle.

Gotcha: Celebrity Secrets is an easy game. Although the difficulty gradually increases as you progress through levels, it doesn't progress in a way that ever makes it hard. This is both a blessing and a curse. For casual game players, it keeps the game at a manageable difficulty. For more experienced gamers, the casual game can almost be played on auto-pilot. The randomly generated people that you must find in the picture are re-used, and faces and silhouettes are quickly memorized. Locating them in the scene can still be a daunting task, but soon, they'll become easily identifiable by their specific characteristics.

All in all, Gotcha: Celebrity is a new spin on the basic hidden object game, and as long as you don't overthink the social commentary angle, it's certain to bring you hours of fun. The developers boast 1200 unique characters to find and stalk- ahem, I mean "blog about," 40 different puzzles and mini-games, and 15 different ways to customize your celebrity blog until you're gossiping as good as TMZ pros.

Bottom Line: Give it a try. There is a free hour trial available at PlayFirst.

Lauren Admire could never be a celebrity gossip columnist. Unless it somehow led to meeting Johnny Depp.