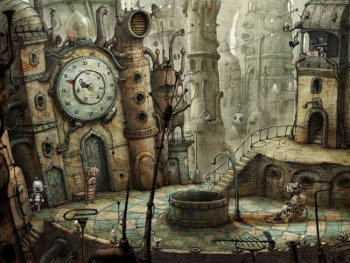 Have you ever had a game that you really, really wanted to like, but just couldn't? Machinarium is such a game. In Machinarium, the latest release from indie developer Amanita Design, you play an unnamed robot, who finds himself consigned to the scrap heap. Armed only with your wits and a body that can expand and contract like an accordion, as well as act like a very big pocket, you set off on your quest to find your girlfriend in the Robot City.

What is striking about Machinarium is the amount of care and attention that has gone into the presentation of the game. Like Amanita's Samorost games before it, Machinarium is unashamedly a 2D game, and its incredibly detailed art has been entirely drawn by hand with a quirky charm that is almost irresistible. Machinarium adds to this off-kilter appeal with sound design that mixes Japanese inflected ambience, retro swing and electronic beeps and blips.

However, as pretty as Machinarium is, when you actually play it it leaves a lot to be desired.

Initially, the game appears to be a point-and-click adventure game, and a relatively simple one at that. The very first screen is a brief tutorial which teaches you that you can only affect items within a certain radius of the robot, that you can expand and contract your robot body and how to use your inventory and the items in it. It all seems pretty standard fare, with your cursor changing if something can be interacted with and actions being context sensitive without you ever having to actually choose anything.

Once you get past the first screen and are faced with the task of "infiltrating" the Robot City, Machinarium's flaws become very quickly apparent. For example, there is no way of distinguishing what might be a useful item amongst all the stunning scenery without going over it with your pointer, turning what appeared to be an interesting adventure game into a frustrating pixel-hunting game and when two objects are very close together, such as a switch and a door, it can be easy to miss the object you need to interact with to progress.

It doesn't really help that Machinarium suffers from some really poor game design in places. As an example, there is a clock puzzle in the second chapter of the game that has an inner and outer dial and having found a crank, you set to the business of changing the time on the clock to solve the puzzle. But, rather than let you manually set the time, like pretty much every game with a clock puzzle ever, you have to make circles with the mouse, with 12 full circles required to move along one increment on the inner dial. The puzzle is incredibly simple to solve, but it is made tedious by the way it is designed.

Probably the biggest problem in Machinarium is that the game is not forthcoming with information. The story of Machinarium unfolds like a picture book, with cartoon-esque thought balloons showing off the backstory, and while this technique is delightful it suffers because there's really only so much information you can relay without any form of dialogue at all. I actually had to look up the premise behind the game, because while I was reasonably certain what was going on, I wasn't entirely sure whether the girl robot depicted in the protagonist's memories was supposed to be his girlfriend or his sister or just a friend of his that happened to be a girl.

This deficit of information also makes many of the puzzles seem arbitrary. In the aforementioned clock puzzle, getting the right time makes a guard come out of his tower so you can head up and have a look. Could I tell you why this happens? No, it just does. Why am I helping the robot musicians? I have no idea, I just am. Luckily, Machinarium has a hint feature and a walkthrough built in, but there is only one hint per screen, and if you've already solved the puzzle the hint relates to, then you're out of luck.

Machinarium's walkthrough has to get a special mention as possibly the least useful example of a walkthrough I've ever seen. Like the hint function, it will only show you the walkthrough for the particular screen that you're on, so if the puzzle you're stuck on stretches across multiple screens, be prepared to take notes. In fact, it might be a good idea to take notes anyway, because the game forces you to play an absolutely dire shoot-em-up each and every time you want to check a page. It's another example of bad game design, and is compounded by the fact that the only reason it is necessary is because of all the other bad game design Machinarium has to offer.

The Bottom Line: This is an amazingly presented game, but it's hard to recommend it as a game, especially considering its twenty-dollar price tag. If you're after a compelling adventure game, then this is undoubtedly not the game for you, but if you want to experience a gorgeous and unique piece of design, then Machinarium might just be ideal.

Recommendation: Try the demo first, and if you want to explore the world it presents some more, hand over your money; whatever you do, don't buy Machinarium for the game.