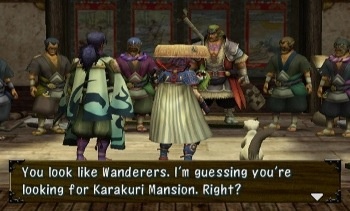 Despite what the title may lead you to believe, Atlus' newest RPG isn't intended for the wandering type. Neither is it for the fantasy adventurers or story-time listeners. Packed from beginning to end with one randomized dungeon after another, Shiren the Wanderer is only for the pure-blooded dungeon crawler...ers.

Like any RPG, the game includes its fair share of two-bit characters and basic plot devices. The voiceless wanderer, Shiren, accompanied by his drunken Sensei, battle-hardened girl-that's-a-friend and sassy ferret, Koppa, has to fulfill a prophecy of which he only became recently aware. If he fails, evil forces, death, fate or something equally life-ruining will probably take over the world. However, this game is a dungeon crawler, not a fairytale, so the campy dialogue, brightly colored animations and pleasant ballads are really just padding. After spending a solid hour trudging through caves and bamboo forests, you'll have just enough patience to rapidly click through the dialogue and dive headfirst into the next labyrinth, forgetting about or ignoring the world outside.

Except for the music and interior decorating, every dungeon you enter is roughly the same: booby-trapped, sparingly sprinkled with helpful weapons and items, teaming with monsters and turn-based. However, "turn-based" doesn't just refer to the combat. The entire dungeon is turn-based. Your movement takes place on a grid, invisible unless you press C. Each step from one square to another counts as a turn. You walk, your partner walks, then the enemy walks and so on. If there aren't any enemies around, this could get painstakingly boring. Thankfully, the A.I. will take over for your companions, and you can walk like normal folk. Then, when you get in a pickle, you can toggle the command so that you have full control. Taking command is also handy for when the A.I. starts using up all of your best items, a far too frequent occurrence.

Navigating about a room littered with monsters can go from mind-numbingly easy to near-impossible, depending on the amount and strength of your foes. But what really drives the battles are the items. Items can be purchased or, in most cases, found somewhere on the dungeon floor. Status ailment spells and herbs, like poison, confusion, and sleep, seem to be the most common. Shiren and his friends can toss these at the enemy, as long as the monster is in their line of fire. Some of the herbs, like healing and curative herbs, are for the team's consumption since, as you know, eating food off of the dirty, monster-trodden ground is good for your health. But while herbs and spells evaporate after one use, staffs can be cast multiple times. A single swing can knock a stone golem back a few spaces, heal a friend or paralyze a ghoul before it teleports you across the map. Scrolls, however, contain the most powerful magic. For instance, an Escape scroll is the only way to hightail it when the going gets fatally tough.

With an inventory that only holds 30 items, keeping yourself well-stocked with the right equipment can be a life or death issue, especially once you throw weapons, shields and armbands into the mix. Keeping this in mind, your companions have to make it from the first floor to the top, however far up that may be, without a single character dying. No save points, no mercy, although you can thankfully suspend the game. If you happen to fall in battle, every item in your inventory disappears, as if making the game harder will help. Adjusting the difficulty to Easy allows you to maintain your inventory, but this can only be done when you create a new game.

As heart-breaking as that "Game Over" screen can be, you still won't want to put the controller down. Dying isn't as frustrating as it is challenging. You simply can't stop until you reach the highest point and win that final battle. Of course, once you reach the top floor and die three consecutive times, you may arrive at a different opinion, especially if you choose to keep the difficulty on Normal or, if you're a masochist, Hard. Without an inventory, you may be forced to backtrack to easier dungeons or leap into the Portal, a meta-dungeon accessible via the in-game menu. Although you can't use the Portal to level up, it's a great way to restock.

For the RPG lover who just wants to cuddle up to a good story, this is no Tales or Final Fantasy game. The story and feudal Japan setting lends the gameplay its goal, but they aren't anything significant on their own. Shiren the Wanderer is a dungeon crawler. You crawl through dungeons, a concept that teeters between boring and challenging. Only your level of patience can tip the scale.

Bottom Line: Every bit of Shiren lies in that foggy, mediocre area: The story is uninspiring but not altogether boring. The visuals are better than most Wii games which doesn't say much. And the step-by-step progression through each dungeon can be challenging and addictive, but you could say the same for skipping stones. It's a tried-and-true dungeon crawler with little else to offer.

Recommendation: The turn-based, back-to-the-basics dungeon crawling could be enough to bring back old school fans, but you can't expect anything greater than that. If that sentence sounded appealing, then rent it. What else are you planning on doing with that Wii?