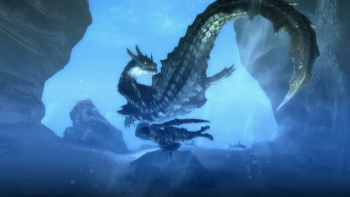 The Monster Hunter franchise has already made a name for itself as the end-all, be-all of fantasy beast slaying where tagging leviathans and carving swaths of dragon flesh for armor is just another day in the field. Monster Hunter Tri is no exception. Despite somewhat blocky graphics and slightly antiquated mechanics, the newest installment on the Wii is just as addictive as the rest.

Split into two modes, you have the option of slashing monsters offline in the Moga Village or online with friends and strangers in the big bad City. Both follow the same pattern of scavenging, hunting and customizing your equipment sets. Of course, in the Village, it's just you and eventually your tiny, somewhat helpful companion Cha-Cha as compared to the City where thousands of people of different Hunter Ranks are ready to join up. But before you dabble in online quests, it's best you get your feet wet in the Village first.

While touted as a "story mode," the true purpose of the Village is to develop your skills as a player and nab a few pieces of armor before making a fool out of yourself among more experienced users. After customizing your character from gender to vocal attitude, you begin as a rookie with nothing but a hunting knife, iron sword and a poor excuse for armor. The villagers, however, expect you to slay a sea serpent who has been terrorizing the island. Lucky for you, the game doesn't include the classic "leveling up." In other words, the only difference between you and a blooded warrior is your equipment, items and experience as a player.

Unfortunately, the journey toward becoming an epic hunter couldn't begin more slowly. At first, you will probably frolic joyfully through the open Moga Woods, excitedly slashing insects and merrily digging up unique varieties of mushrooms in order to concoct special potions back home. Eight hours later, you'll be trudging across the same damn island, slashing the same damn insects and digging up the same damn mushrooms. Like the worst RPGs, your only quests involve slaying the same beasts and scavenging the same items again and again. And while you may be able to craft better armor and weapons, sewed from the flesh and bones of your latest kills, you'll still be hacking away at your prey with nothing more than A, A, A and more A.

Once you've completed a set amount of quests, the leviathan appears. Unlike its predecessors, Monster Hunter Tri allows you to search for prey under the sea. Because of a healthy pair of lungs and underwater air bubbles a la Sonic, breathing isn't too much of an issue. Attempting to swim less like a spastic, finless dolphin suffering from vertigo, however, is another matter. The camera and directional controls are absolutely abhorrent, making underwater kills especially challenging. On the other hand, this uncontrollable mess is what makes the appearance of the leviathan so frightening. Meeting those beady red eyes is the first time you'll encounter a true monster that, at this point, you're not near talented enough to fight. So you run. Or swim. Or try to swim. And it's terrifying.