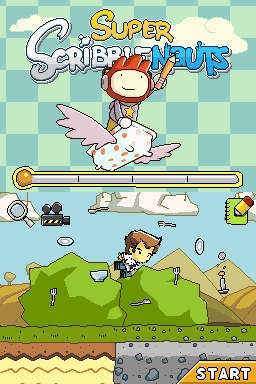 It's tough to really encapsulate the sheer awe that gripped gamers and journalists alike when 5th Cell revealed Scribblenauts last year at E3. Here was this small, unassuming game created by a small, unassuming developer - so what was it doing on so many "Best of Show" lists? The concept of being able to write, create and use almost any item you could imagine was brilliant and original; was it any wonder that we went gaga over it?

Unfortunately, on release the game itself was revealed to have its share of problems that dulled its luster, such as a wildly imprecise and occasionally unpredictable control scheme and repetitive tasks that gave you too many options and not enough to do with them. The result was a flawed piece of potential genius - if only something could have fixed those flaws!

Enter Super Scribblenauts, which does precisely that.

Super Scribblenauts is a game caught in a strange place. It's more of an expansion pack than a sequel - yes, it has entirely new content and several changes and additions to the mechanics, but it feels like more Scribblenauts. Or rather, it feels like a game that actually lives up to what Scribblenauts originally promised.

If there is any one significant change worthy of note in Super Scribblenauts, it's that players now have the option to control protagonist Maxwell with the D-Pad and buttons rather than just the stylus. It's an incredibly welcome change, and it goes a long way to alleviating the frustration that came with the last game.

The second notable addition is that Super Scribblenauts adds adjectives to the list of words that can be used to summon objects. A fuzzy toaster makes bread and has fur, a polka-dotted bathtub is ... just what it sounds like, and a living house is just plain creepy.

The adjectives are put to good use in the newly enhanced challenge levels, which ask players to create objects that share characteristics with other objects. What item would a leopard and a leprechaun both like - a spotted shamrock, naturally. What defeats a cold stegosaurus? A fiery T-Rex, of course. Levels have more of a structured framework this time around, which strangely makes them more enticing and more fun than the wide-open levels of the first game.

Everything feels like it was more thought-out in Super Scribblenauts. If you're stuck, you can buy hints that point you in the right direction. To get the points needed to purchase hints, you need to be creative and use different words rather than just completing every level with an "infinite jetpack." Completing challenges can offer up other words to try out that you might never have thought of on your own. It's more streamlined, it's more structured, and in giving you a clearly defined section of ideas and tools to work with, Super Scribblenauts encourages more imagination than the first one ever did.

The downside, of course, is that this just means that Super Scribblenauts is the game Scribblenauts could have - and should have - been. The mind-blowing premise isn't as new and as impressive as it once was, because we've seen it before in a rougher, less entertaining state. Is it good? Sure. Is it still creative? You bet. But there's a very "been there, done that" feel this time around, and that's a real shame - unless you never played the first game, in which case you'll probably find that it's pretty darn awesome.

Bottom Line: This game preserves the original and imaginative core of the original Scribblenauts while simultaneously fixing almost all of the problems that made the first game such a chore. It controls better, it has more sorely-needed structure, and it's just more satisfying to pick up and play. It just isn't as mind-blowing a concept anymore.

Recommendation: If you never played Scribblenauts, this is a sure thing. If you were frustrated by the original Scribblenauts but liked the concept, this is the game for you. If you own a DS, you could do a whole lot worse than Super Scribblenauts.

John Funk will have nightmares about that undead house. It could eat him!