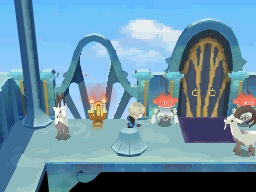 Final Fantasy: The 4 Heroes of Light was obviously developed with the intention to recreate the feel of the Final Fantasy franchise before Cloud brashly introduced himself in 1997's Final Fantasy VII. It uses techniques and themes mostly present in the Final Fantasy titles from the Super Nintendo age and earlier, and though it doesn't reach the epic levels of highlights such as Final Fantasy IV or Final Fantasy VI, it's a game that should feel familiar to anyone that grew up playing RPGs in the 8-bit and 16-bit eras.

The story in 4 Heroes isn't totally conventional, but it doesn't break a lick of new ground. The four main characters don't have much personality, aside from their strange desires to always leave each other behind, so character development isn't this game's strong suit. 4 Heroes is basically about a single quest that leads into a much larger effort, with a plot that switches around from character to character as the party is accidentally, and purposefully, separated. Eventually, everyone comes back together, and the world opens up.

Players will save townspeople from being turned into stone, contracting strange illnesses, being possessed, and stop the forces of chaos attempting to, well, do chaotic things. Anyone that's played an RPG can predict where 4 Heroes's narrative ends up going, but the game isn't boring, and 4 Heroes's simplicity actually makes the game a light, fun adventure that still keeps itself from becoming too vanilla. How could it not feel good to lead the group of heroes that eventually save the entire world?

Like in many RPGs, fighting random battles and the eventual big boss is a big part of being one of the heroes in 4 Heroes of Light. Players can change their characters' battle abilities by switching between 28 different crowns, which resemble the Final Fantasy series' often-used jobs. Equipping a specific crown gives a character one general ability, such as increased sword damage, and up to four in-battle abilities when fully upgraded, such as making the next spell more powerful. These abilities can only be used while wearing their specific crown.

Crowns can be upgraded by collecting 8 different types of gems, some more rare than others, which are awarded at the end of each battle instead of currency. You'll choose to either inlay these gems in crowns to upgrade their abilities, or sell the gems for profit, creating a trade-off until certain gems become readily available. Crowns themselves are collected by defeating bosses, completing mini-games, and other methods, so you won't miss out if a treasure chest gets left behind in the corner of some dungeon. Mixing and matching new crowns while trying to find the most effective party is one of the most fun parts of the game. Do you want a spoony bard, two thieves, and a paladin? Perhaps three black mages and a white mage? It's all up to you.