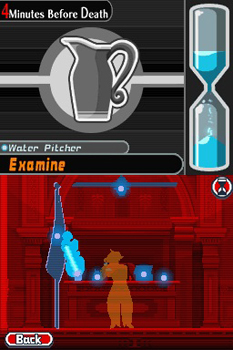 Ghost Trick: Phantom Detective (DS) begins with an unusually depressing premise: You're dead. You do manage to come back as a ghostly spirit, but with no memory of who you were, or why someone might've shot you. Even worse (if there is a worse, I mean you are dead, after all), you only have a few hours to figure it all out because come morning, you'll cease to exist entirely. It's a grim setup for what turns out to be surprisingly inventive, bright, and genuinely funny puzzle game.

You don't have a body anymore, and you can't actually just float around the way ghosts in movies do, so to get from point A to point B, you'll have to possess inanimate objects. Tapping a button on the lower screen allows you to enter the Ghost World and see which objects can be possessed; to move, simply drag your ghostly essence from one bright spot to the next. Your spirit can only move a limited distance, so you'll frequently have to rely on your "trick" ability to get where you want to go. When you're possessing an object, the top screen will let you know what that item will do if you do a ghost trick. A tire might roll, a lamp might turn on, and so forth. Not all objects have tricks, so moving around the environment usually requires a bit of planning.

Tricks also play a vital role in another one of your new ghostly powers - the ability to rewind time and save another soul. It's a peculiarly specific power - you can only go back to four minutes before the person's demise - but works brilliantly with your tricks to create long chains of intricate puzzles. At first, saving someone's life is as easy as avoiding a single event - make sure they're not in the wrong place at the wrong time, and presto, Fate Averted. As the game progresses, however, these puzzles become more and more complex, with many layers of events that need undoing in order to save the day. To save the girl who got squished by the giant chicken leg, for example, you must first save the guy who crashed the van into the restaurant window.You can't use your powers to save yourself, sadly, but you can rescue characters who might just help you learn the truth about your own murder.

As you might expect from the creators of the Phoenix Wright series, despite the fact that it's dealing with some pretty downbeat stuff - several murders, an inmate on death row, conspiracy - Ghost Trick has an endearingly weird sense of humor. A detective investigating your case dances around like Michael Jackson's biggest fan, one of your allies is an exuberant Pomeranian, and then there's that death-by-giant-chicken-leg I mentioned earlier. It's kooky, but not so over the top that you stop caring about the characters or getting to the bottom of what happened in that junkyard. The puzzles are the real meat of Ghost Trick, but the story is spun out at just the right speed, maintaining your interest without bombarding you with information.

Solving the game's ever-more-intricate puzzles will require more than a little trial and error, but the more complex a puzzle, the more checkpoints it contains. If you fail, you can choose to start over completely from scratch or simply try it again from the last Fate Change. Starting over is helpful if you've left the game for a while and can't quite remember what you're trying to achieve, but the ability to tackle larger objectives in small chunks saves a great deal of frustration and unnecessary retracing of footsteps.

As clever as its core puzzle mechanic may be, Ghost Trick's visual style is what will win you over. Its bright, bold blocks of color take the edge off the subject matter and make characters that could've otherwise been aggravating into real charmers. The animations are visually interesting, even if they do tend to repeat a fair amount. You'll undoubtedly spend a lot of time staring at your DS screens as you try to puzzle out Ghost Trick's more difficult sections, so the colorful design is an even bigger bonus.

Bottom Line: Ghost Trick: Phantom Detective is a clever concoction that will stretch your brain in pleasantly unusual ways. It strikes just the right balance between whimsy and challenge, always just the right amount of difficult and bizarre.

Recommendation: If you enjoy lateral thinking and memorable characters, definitely pick this one up. The slick visual style doesn't hurt any, either.

Susan Arendt's dog's reaction to pretty much everyone is also "Welcome!"