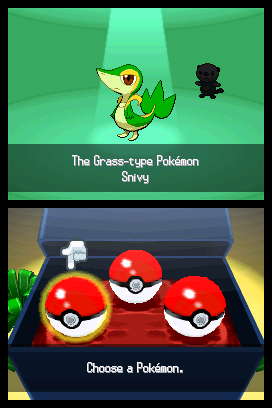 Playing Pokémon Black & White is kind of like going back to visit an old house you used to live in: The structure might be the same, and the rooms haven't changed much, but there's new wallpaper and new furniture. "Huh," you say to yourself, "That's not how it was before."

Since the days of Red & Blue, Pokémon has always been a very iterative series. The changes between successive versions are rarely world-shaking and when they are, it's generally only for the hardcore competitive crowd. Changes made to Pokémon usually tweak things that didn't work so well in previous games and add some new features here and there, that will inevitably need to be tweaked down the line. If you're expecting Black & White to be a radical and revolutionary departure from the series' past thus far, you're in for a disappointment.

Much of the framework in Black & White is how you remember it if you've played even one game in the series: You're a young boy (or girl) starting off on a grand new Pokémon adventure with your childhood friends. Choose one starter 'mon out of three options (grass, fire or water), go to visit the local Pokémon Professor, and you're off! You need to beat the eight gym leaders, challenge the Elite Four and their Champion, and on the way you'll have to defeat an evil organization out to steal Pokémon/rule the world/destroy the world/all of the above.

That core structure hasn't changed, but the set pieces within it have. Instead of having just one hometown rival (who always takes the starter with an elemental type advantage over yours, the jerk), you have two - a calculating young man who tackles his journey with mathematical precision, and an absentminded girl whose father doesn't approve of her leaving on a Pokémon adventure. The villainous team is actually a fanatical animal-rights organization who believes trainers who use Pokémon are mistreating them and that the monsters must be liberated from the humans who enslave them. Even the gym challenges mix it up a bit - the first gym is a three-type shindig that will always have an advantage over whatever you started with. You don't get to choose Bulbasaur for a free ride anymore.

Pokémon Black & White's willingness to tackle topics like individual freedom, one's independence, and the potential ethics of forcing cute animals to fight at your personal whims give the game a more somber and more grown-up tone than previous entries in the series. It's hardly the deepest treatment on the subject - in many ways it feels like an SNES-era JRPG - but it manages to tell a compelling yarn nonetheless, and should satisfy fans of the series who have wanted a more involved storyline for ages.