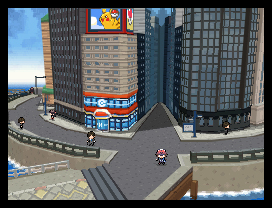 One of the biggest breaks Pokémon Black & White makes with previous games in the series is its setting. Every new generation of Pokémon titles has introduced players to a new region of the Pokémon world - Kanto, Johto, Hoenn, Sinnoh - but while they've all introduced dozens and dozens of new monsters to catch, you've also had familiar faces like Rattata, Zubat and Geodude. The Unova region is set on the far side of the Poke-world - while the other regions were based on locations in Japan, Unova is inspired by the Manhattan metropolitan area - and features an entirely new cast of characters. You won't see a single Pikachu until well after you've beaten the game.

For the most part, this is actually a very smart design choice. It means that players can't just rely on their tried and true old workhorses like Alakazam or Jolteon, and must get to know the new roster. Said roster is a bit of a mixed bag: While there are certainly some cool-looking 'mons in the bunch, there are also some outlandish designs that are a bit too weird, even for Pokémon. Did we really need a trash-bag Pokémon? Still, it's refreshing to encounter an entirely-new monster in the field and not immediately know everything about it, and it fits with the series' emphasis on exploration.

Pokémon Black & White's battles are the slickest the series has seen yet. While it still ultimately boils down to two teams exchanging attacks, the developers approached this game with a more cinematic eye. The camera zooms and pans across the combatants instead of remaining static, and the battle sprites themselves are active and animated. Emonga (an electric flying squirrel) glides and swoops with a smile on its face, Herdier (a terrier) paws at the ground, and the psychic Munna lazily floats in a half-dream state.

Not only do the sprites have tons of character and help endear the player to even the more questionable designs, but they also convey information: When a Pokémon is under the Sleep condition, its eyes close and its movements become much slower. It's not the fully animated battles that Pokémon fans have been dreaming of for years, but it's certainly more visually appealing.

The battles themselves are also much faster than in generations past. Attacks that hit multiple targets do damage to all of them simultaneously, and said damage is dealt instantaneously - there's no more waiting for a health bar to slowly diminish. If that sounds like a minor change, it is, but it's also a change that hugely improves the pace of combat. Another minor change that ends up feeling like a godsend is that the developers have removed the irritating "critical health" noise that popped up whenever your Pokémon was close to defeat, and instead have replaced it with an urgent remix of the battle theme that gets your heart pounding but prevents your ears from bleeding.

Also, TMs that teach your monsters new moves can now be used infinitely, which is a change the series has needed for years.