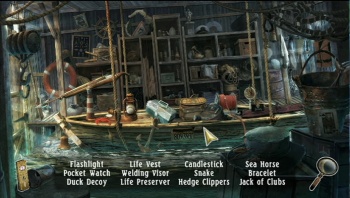 When it comes to hidden object games, the Mystery Case Files series is pretty much the gold standard, combining beautifully detailed graphics with clever puzzles and intriguing storylines. Thanks to the Wii's hardware, The Malgrave Incident isn't quite as impressive as Mystery Case Files you'd find on the PC, but hidden object fans will enjoy solving its mysteries.

You're invited to Malgrave Island by the mysterious Winston Malgrave himself, who needs your help saving his beloved Sara. The island was once a popular tourist spot, famous for waters that supposedly had near-miraculous healing powers. The local population has long since fled, the island resort left abandoned and crumbling. Malgrave, who communicates with you via a device that looks an awful lot like a Wii Remote, has hired you to search the island for pockets of pink dust that will apparently help restore Sara to perfect health. He's less enthusiastic about you uncovering any other secrets the island might hold, however, which naturally makes you want to dig even deeper. You'll figure out the twists of the story long before they ever happen, but it's a good enough tale to keep you soldiering on.

The Malgrave Incident has two basic type of gameplay: hidden object searches and puzzles. For the former, you're presented with a list of items to locate within an area crammed with junk. It's an easy enough concept, but BigFishGames are masters at hiding things in plain sight; you'll be positive that the thing you're looking for isn't actually in the scene at all, only to suddenly realize that you'd been staring at it for five minutes. Checking items off your list is as easy as pointing the Wii Remote and hitting the A button, though you can zoom in and out with the d-pad if you need a change in perspective. As you explore the island and discover new locations, you'll encounter new hidden object areas. At times, the game can be vague about what you're meant to be doing, but examining your journal, or looking for dust locations on your map, will usually get you back on track.

Your reward for solving a hidden object sequence is a bit of dust and an item for your inventory, which you'll typically use to solve some kind of puzzle. The puzzles of The Malgrave Incident are a mixed bag of environmental obstacles, such as locked doors, and actual brain teasers. The latter are all very well designed and at times quite inventive, but also include stale chestnuts like sliding tile puzzles. In true adventure game fashion, you can't progress until a puzzle is solved, but you'll be given the option to skip a puzzle once you've spent enough time banging your head against it. It's a welcome way out - being able to solve a puzzle you don't enjoy and being willing to solve a puzzle you don't enjoy are two very different things, after all. The Skip button may offend hardcore players, but those who just want to get on with enjoying the game will be glad it's available.

Making progress through the adventure mode unlocks locations for the multiplayer mode, which allows you to pit your object-finding skills against a friend. Finding all of the tiaras, bears, kites, and watches sprinkled throughout the landscape unlocks cutscenes that fill in some of the blanks about what really happened on the island, and postcards provide yet another collectible.

Although the Wii controls are generally well-suited to the point-and-click nature of The Malgrave Incident's overall design, they do cause problems with the maze puzzle that ends every level. Once you've collected enough dust, you must dump it into a machine that will unlock a gate and clear your way to another part of the island. Before you can drop off your payload, you must first align a set of concentric rings to solve a maze, creating a path for the dust to actually get to the machine's innards. To grab a ring, you point the Remote at it and hit the A button. Normally, the control works just fine, but at times the ring goes spinning wildly, which is extra frustrating given the amount of concentration the later mazes require. It's the one place in the game that the controls don't work perfectly, but it almost became enough of an aggravation to make me quit playing. The graphics also take a bit of a beating when compared to the Mystery Case Files on the PC. They're still quite eye-catching, but the Wii's lack of HD takes some of the shine off the intricately detailed environments.

Bottom Line: The Malgrave Incident is, true to Mystery Case Files form, an excellent adventure with just enough challenge to keep it intriguing without scaring off players looking for an engaging casual experience. Old school adventure fans will likely find the game to be a bit too shallow and easy, but casual gamers will appreciate the pace and polish.

Recommendation: If you're a casual gaming fan who's been looking for a reason to fire up the Wii, this is a great one. Those looking for a greater challenge should probably move on.

This review is based on the Wii version of the game.