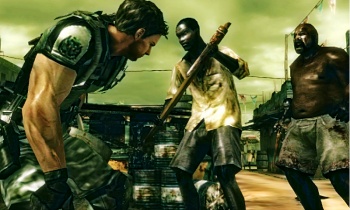 Resident Evil: The Mercenaries 3D attempts to boil the Resident Evil experience down into one that can be enjoyed portably by taking the Mercenaries minigame from earlier Resident Evil titles and building an entire game out of it. It's a decent idea that makes for an entertaining on-the-go experience when played in short bursts, but ends up feeling shallow in the long run. There is some longevity provided by unlockable characters, costumes, and skills but eventually, shooting enemies in the head throughout the same set of levels becomes repetitious.

The story is delivered early in the game by the exuberant narrator who seems to be your trainer and commander. In a couple of sentences, he gives away both the entire plotline and the reason he doesn't work for the military: "I think it's time for you to learn a little strategy. The purpose of The Mercenaries is to defeat as many enemies as possible within the time limit." (Alright men, I've studied the intel and I think our strategy should be to quickly kill the enemy!) To be fair, that's exactly what you do: The game is a series of self-contained levels with a time limit that can be extended by breaking glowing red obelisks. Points are earned by killing zombies (or, occasionally, boss creatures) and are increased with combo kills. Afterwards, the player's performance is graded, which may unlock a new character, skill, outfit, set of levels, or some other trinket, and then it's back to selecting another level. Repeat until exploding zombie heads becomes boring (this may take a while).

That said, the shooting feels as good as it ever has in the Resident Evil games - if anything, it feels slightly improved by allowing the player to move while aiming which, though slow and rarely useful, is a good first step in addressing the issue of being locked in place while firing that plagued Resident Evil 4 and 5. Hit detection feels good, locational damage is accurate, and guns have a range as long as the view distance, which is impressively far for a handheld game. The control scheme has been adapted well to the controls of the 3DS, and I only rarely felt as though I were struggling against them more than I did their console equivalent.

The unlockable extras provide a sense of advancement that helps bind the arcade experience of the rest of the game together. Though players will likely be able to unlock all the levels and characters with relative ease, earning the alternate outfits and signature weapons requires much more effort, and even advanced players will be challenged. The skills, however, are what provide the most compelling reason to persist. Each character can select up to three skills to use at any one time, conferring benefits ranging from increased weapon damage to faster reload rates. Further, these skills become more powerful as the player earns points with them equipped. It doesn't prevent each round from feeling similar to the last, but it does give players a reason to play the rounds more than once.