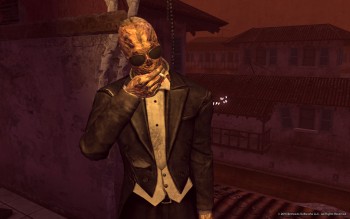 With just one planned DLC adventure yet to be released for Fallout: New Vegas, it's time to take a look at the first three DLC offeirngs so you can decide which - if any - are going to be worth your time this summer. Let's take them in order of release.

Dead Money drops you into a twisted setting dominated by the long-forgotten Sierra Madre casino and populated by holograms, odd "Ghost People," and a handful of mismatched characters on their own adventures. Your quest in this adventure is to participate in a heist, specifically the looting of the Sierra Madre which has lain dormant since its opening day. Said opening day being, coincidentally, the first day of the ancient nuclear war that turned the Fallout world into what it is today.

Each character you meet has a part to play in the heist, all of which is being orchestrated by a mysterious madman with whom you face off in the end. Although the casino itself is a major let-down after the often tedious adventuring it takes to get into it, the DLC as a whole is a unique and interesting experience.

It's interesting to look back at Dead Money now, after having played the subsequent two DLC adventures. In my original review of Dead Money, I recommended it as a must-buy, specifically noting its narrative and innovative transformation of New Vegas from post-apoc RPG into a survival-horror adventure.

In short, Dead Money is a near-perfect expansion. It breaks the style and mechanics of the original game just enough to offer something truly unique - but not so much that it feels out of place - and adds enough new content to give players a reason to spend even more time with the game than they already have (I'm at 200+ hours and counting). The story is inventive and enjoyable (if a touch overwrought at times) and all of the new elements are welcome additions. I finished playing Dead Money wishing it had been longer - or that the main game of New Vegas had shown as much polish and inventiveness.

That's high praise. So what's changed? Dead Money may shine compared to the main New Vegas game, but it pales in comparison to Honest Hearts and Old World Blues, both of which raise the bar substantially not just for DLC in general, but specifically for Fallout adventures. If Dead Money were the only DLC available for New Vegas, I'd still consider it a must-buy for the uniqueness of the experience alone, but it's not, and having had a chance to go back to it after playing the latest two adventures, I have to walk my initially glowing praise back a bit and call it a "maybe."

Honest Hearts is a whole other kettle of Geckos. Set in what used to be Zion National Park, Honest Hearts will fill you in on the back story of the legendary "Burned Man," as well as give you a chance to decide the fate of the tribals living in Zion, whom the Burned Man has been protecting from Caesar's Legion.

On my first playthrough of Honest Hearts I inadvertently killed the main quest-giver while fending off a tribal ambush. I didn't know this at the time, of course. As soon as the tribals opened up on me, this dude came running right through the battle lines and I mistook him for someone trying to kill me. It was only after I finished the adventure, having run the entire thing in about three hours never once encountering a friendly NPC, that I suspected something had gone horribly wrong.

That said, having obliterated the main quest, the game was still plenty of fun. I was able to secure the object I was sent to retrieve and the exploration was just as much fun as it would have been if I'd done it "correctly." There was just a lot more combat and a lot less talking. Which, sometimes, is a good thing.

Playing the game as-written, you'll meet Joshua Graham, AKA the Burned Man, along with a member of the New Canaanites. Both Graham and Daniel are trying to save the tribals, but each has a slightly different agenda. You get to choose whose side will win out.

Throughout the course of the adventure you'll pair up with a handful of different tribal warriors, each with a story and a unique perk. You'll also score some new weapons and items. The silenced .45 caliber automatic is a fun thrill, as is the Smokey Bear hat and a suite of ranger combat armor that won't flag you as a member of the NCR.

What really makes Honest Hearts sublime, however, is the scenery, the haunting exploration and how seamlessly it fits into the overall New Vegas experience while simultaneously putting the larger game to shame.