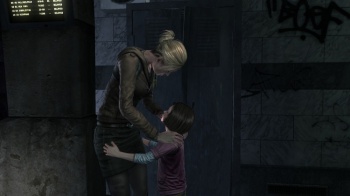 I want to like Amy, I really do. The story, about a young woman trying to protect a mute child who's been the subject of malicious experiments, pulled me in and instantly made me care about its two stars. A game that combines maternal instincts with puzzle solving and zombies is remarkably on target for my personal tastes, but Amy is a buggy pile of bad decisions that I couldn't bear to play for more than a few hours. It gets almost everything wrong.

We meet the timid Amy and her guardian, Lana, as they're en route to consult a doctor about Amy's unusual condition. Lana has rescued Amy from a center where she was the subject of bizarre experiments - the very same center that seems to be the source of whatever contagion is now turning people into zombies. Part of Amy's appeal is that your goals are so relatable - you're not trying to save the world, you just want to protect a helpless, terrified child. Small victories like finding a working telephone or unlocking a door are far more significant when they help you get Amy one step closer to safety.

Amy's lack of polish is obvious from the opening cut scene, which showcases the game's amateurish voice acting, awkward animations, and the typos that pepper the subtitles, but things really start to head downhill once you actually have to get up and move. Just walking is a chore, as Lana lumbers her way inelegantly around corners and into doorjambs. Combat is clunky - some melee attacks will pass clean through enemies while others connect. How close you need to be to your foe in order to land a blow seems to vary based on a bizarre set of rules known only to ascetic monks who learn the secret after years of silent introspection.

To make sure that you take your role as protector seriously, Amy demands a fair amount of interaction between you and your young charge. Many of the game's puzzles require you to coordinate movement between Lana and Amy, but this quickly leads to scenarios that defy credulity. There are plenty of puzzles that put Lana on one side of the room hitting switches that move Amy around the other side of the room, or vice versa. While sound enough from a puzzle point of view, they're utterly stupid when you remember that the duo is supposed to be in an actual train station. We're supposed to believe that the only switch to work an elevator is up a ladder across the room, meaning that simply going up one level is a two-man maneuver? Is this some kind of union job, or something?

Forcing Amy and Lana to work together might be a refreshing approach to the kinds of locked-door puzzles that are typical for survival horror games, if it weren't for Amy's sluggish controls. Tapping the right bumper will call Amy over to you; hold it down and Amy will hold your hand. Eventually. Maybe. If she feels like it. Sometimes she lets go, sometimes she simply refuses to acknowledge you exist ... which is at least a fairly accurate representation of dealing with a small child, I guess, but not very fun in a game.

Part of what makes Amy so frustrating is that it genuinely does have some interesting ideas. Though you will have to find the color-coded key cards that game developers seem to believe will be ubiquitous in the future, you also have to hack DNA-coded locks by finding the remnants of the people who were cleared to use them. It's a fresh and gruesome twist on the lock puzzle that encourages you to explore your grim environment. When faced with an enemy that's more powerful than you - which is most of them - you're encouraged to hide quietly until they pass by. It's a great idea that's often spoiled by Amy's wretched checkpoint system, which forces you to replay huge swaths of the game should you die. Worse yet, you can't stop playing mid-chapter; if you don't finish, you'll have to start over from the beginning the next time you fire up the game. Repetition is the death of fear. The monster that terrified you the first time it burst through the door is simply tiresome the fifth time you see it.

Amy also seems reluctant to help you understand its basic mechanics. Amy can acquire psychic powers by transcribing glyphs she finds on the walls, but her abilities disappear without explanation. Are they on a timer? Do you only get a certain number of uses? Are the powers limited to a particular area? Amy doesn't give you any clear indication. You'll encounter a situation that seems perfectly suited to one of Amy's abilities only to discover that she no longer has it. Loading screens provide tips here and there (though sometimes they're spelled wrong), but be ready for a lot of floundering around and confusion as you slowly piece together Amy's ramshackle mechanics.

Bottom Line: Pick something to hate about videogames, and Amy has it. Graphics glitches, lousy design, repetitious gameplay, mushy controls, bad acting, horrible save system ... it's all there. The game's few good ideas simply aren't enough to suffer through the amount of crap surrounding them.

Recommendation: Despite what its developers may tell you, playing Amy on Easy doesn't solve its myriad of problems. You could buy Amy, but you'd probably have more fun just setting your ten dollars on fire.