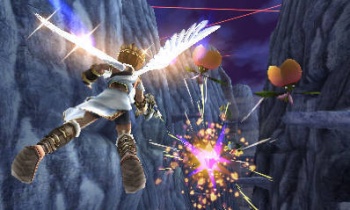 If you're a long-standing fan and have adventured with Pit before, then you're going to find him a lot less pixelated than you remember. If you're new to the Kid Icarus series, Kid Icarus: Uprising follows a plucky angel named Pit who is a servant to the Goddess of Light, Lady Palutena. The game opens up with a nemesis from the earlier Kid Icarus games, Medusa, the Goddess of Darkness, stirring up the underworld troops for battle yet again. It's up to Pit, as Lady Palutena's most trusted soldier, to protect humanity and defeat Medusa, but the plot quickly thickens as a lot of other gods and goddesses decide to throw their hats ... er ... laurel crowns into the ring.

Kid Icarus: Uprising has a history with several other games in its series and it does a good job of catering to fans who've been with the series for awhile and welcoming new players. When Pit encounters a monster or a boss he's met in a previous game, an old picture of that character flashes on the screen and there's some dialogue discussing the last time you faced them. For long term fans this brings in a bit of nostalgia for those old pixilated forms, while at the same time being able to appreciate how far the series has come. For newcomers, the nostalgia does a lot to fill in the blanks and catch you up on what's going on without making you feel like you're missing out on an inside joke. But it does give a shout out to other classic Nintendo games, like when Pit asks why one of the monsters looks suspiciously like a metroid the goddess promptly replies with a "shhh!"

Speaking of pixels, Kid Icarus: Uprising looks great in both 3D and 2D. The 3D and the flight scenes work really well together, giving the flying a real sense of movement. But there is a lot of movement and the fights are generally fast-paced, so your desire to keep the 3D on will really depend on how easily your eyes strain. The 2D works very well, and while it lacks that extra bit of magic that 3D brings to the game, 2D breaks won't take away from the experience.

The gameplay is pretty straight-forward. Lady Palutena controls Pit's ability to fly and only graces Pit with a limited flight time. If he goes over the set flight time then, like Icarus from mythology, his wings burst into flames and he falls out of the sky. This never really makes into the gameplay though, and while it is discussed and featured in cutscenes, you never actually have to beat the clock to get to your destination. The limited flight time mostly serves to setup the formula of the levels. Each level opens with Pit flying to his destination, shooting down enemies in the process, then landing once he's reached the extent of his flight. Once he's made it to the landing zone, a ground battle ensues until you reach the end of the level and defeat its boss. It's not terrible and the levels are fun, but almost every level follows this formula and eventually the constant pattern of fly, land, boss fight starts to take on a tired rinse-and-repeat feel.