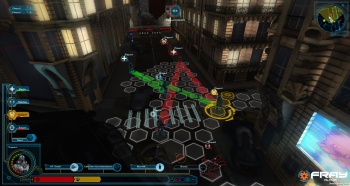 In Brain Candy's Fray, four-man teams of soldiers belonging to one of three mega-corporations battle for control of Earth in the year 2098 in turn-based, online tactical combat. It looks pretty decent at first glance, but it's desperately short of the players it needs to succeed, and worse, it's riddled with bugs that leave it in a nearly-unplayable state.

Each round in a game of Fray begins with an "orders phase" in which everything is held in a sort of suspended animation while commands are issued to individual fighters. There's a time limit to ensure that people don't take all day with their decisions, and even the slowest-paced games, with a maximum of two minutes per turn, have a certain sense of urgency. Balancing that time crunch is a relative lack of tactical complexity, however, as only a limited number of options are available for each soldier. You can order your men to move, shoot, reload or adopt offensive or defensive postures, while specialized classes can also carry out unique tasks, like healing or resupplying their squadmates.

Each soldier has a limited number of action points that determines how much he can do in a single turn, and each action is pre-plotted along a bar near the bottom of the screen that makes it easy to determine what he can and can't get away with. Equipment like health packs, turrets, teleporters and mobile spawn points help keep the battlefield fluid, and only one of each of the game's six classes - Assault, Tank, Shadow, Sniper, Support and Medic - can be added to the squad. Four-man squad, six classes - choices will have to be made.

Once everybody has their orders in, the "resolution phase" begins and Fray becomes a spectator sport for a few seconds, as bullets fly and soldiers fall. But that's also the moment that highlights one the game's glaring weaknesses. There are no XCom-style cinematic kill-cams here, nor is much feedback provided about what's actually happening in the field, and that leaves it at risk of falling into the cracks between the eye-candy fiends and the hardcore number crunchers. Fray doesn't feel like it's aimed at any particular audience, and while the gameplay isn't bad in any specific sense, neither is it particularly good. It's just sort of... there. It's competent, decent, passable - call it what you will - and would probably qualify as a satisfactory but ultimately forgettable niche title, but for one big, ugly problem: bugs.

It's an absolute mess. The 1.0 version that I initially played was very rough around the edges, with dodgy and imprecise click recognition, occasional refusals to recognize orders and numerous other technical and gameplay issues. A "big patch" intended to clear up the worst of these bugs actually had the opposite effect; a new bug sometimes keeps some players from connecting, and it crashes with such alarming regularity that I haven't played a single match to completion since the patch came out. Customers running 32-bit versions of Windows have been locked out of the game completely and although Brain Candy says that situation is temporary, there's no indication as to when they'll be allowed back.

Bugs aside, Fray overlooks a number of small but significant details as well. Camera controls are clunky, which becomes particularly noticeable when squad members are spread out across a map and you want to keep track of what everyone is up to when the bullets are flying. The free-floating chat window tends to be in the way no matter where you put it, and since there's no scrollback buffer, any conversation you missed is gone forever. There's also no way to specify allowable player levels when creating a game, nor to tell the level of waiting players when you join one, so newbies squaring off against seasoned veterans (who, generally speaking, are nice enough not to be dicks about it) is an unfortunately common occurrence.

The whole thing feels very "early beta," which is unfortunate because Fray does show signs of promise. It's never going to be a mass-market hit, but as a simple, stripped-down tactical toe-dip, it might have been the kind of thing that very casual fans of the genre could enjoy. As it stands, however, it's a broken, nearly unplayable train wreck, and there's just no reason to bother.

Bottom Line: Fray is not ready for prime time. It's not particularely exciting even when it works, and right now, it just doesn't work.

Recommendation: Unless you want to pay for the opportunity to beta test a game, give this one a pass.