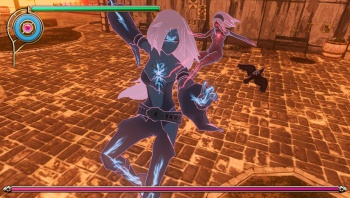 The highest praise I can give Gravity Rush is that it rarely made me feel the urge to vomit. That may sound harsh. It isn't. For a game that involves so much faffing around with gravity, Gravity Rush is almost as easy on the stomach as it is on the eyes.

Players take on the role of Kat, a sprightly, blonde amnesiac who awakes alone and confused in the labyrinthine alleyways of the floating city of Heksville. Not prone to introspection (or any complex emotion for that matter) Kat immediately sets off to explore her surroundings. After a brief tutorial, she comes across Dusty, a cat-shaped hole in the universe.

With Dusty at her side, Kat becomes a "shifter," an unpopular minority capable of making the laws of gravity go all squiffy. A tap of the right trigger will cause her to float, while a second tap will orientate her personal gravity in the direction she's facing, causing her to "fall" forwards. While her power meter holds out, Kat can walk on any surface, provided gravity is orientated in that direction, but she spends most of her time in the sky, hurtling back and forth like a clumsy low-rent Superman.

Once you've got a handle on Kat's abusive relationship with the laws of physics, you can finally begin to get a handle on Heksville's unique landscape. It's actually quite an unnerving, Kafkaesque sight. The city is split into districts, each a floating island, which are suspended above a seemingly endless void. Vast chunks of the city are missing, torn off by black-hole-like gravity storms.

While the top layer of the city is filled with bustling crowds and signs of life, the underside is a disconcerting mess of girders and supports, railings and sewers that lead nowhere. There is a slight air of menace to Gravity Rush's depiction of impossibly vast industrial architecture.

Despite occasional moments of darkness, the game, on the whole, is very cheerful. Kat is endlessly chipper for an amnesiac who lives in a sewer, and her mildly dim-witted desire to do good at all costs keeps the story grounded, even as it dips into the metaphysical.

Most of the game plays out in a sandbox style, with Kat hurtling around the city performing missions - none of which completely capitalize on Kat's gravity-shifting powers, unfortunately - and occasionally dipping into surreal, alternate dimensions to retrieve missing city blocks. Most missions play out in a fairly similar form. You fly from one checkpoint to the next, read some dialogue, fight some enemies, rinse and repeat. Despite being bookended with well-written written story segments presented in a clean comic format, these missions rarely seem like anything other than a distraction from the game's main appeal: exploration. Heksville is littered with collectable crystals, most of which are suspended on the town's underside. These crystals, which can also be won through challenge missions spread around the city, allow you to power up Kat's abilities, providing her reputation score is high enough. Reputation, in turn, is gained through completing the story missions, which infuses the game with a fairly easy-going, if slightly repetitive, rhythm.

The game's combat is largely unremarkable. You'll spend a large portion of the game fighting against the "Nevi," a race of black and red slime monsters. You'll fight the usual suspects; small, scuttling Nevi, flying Nevi, Nevi that shoot energy balls at you, big Nevi that try to punch you - but given Kat's ability to fly out of their reach, they'll spend most of their time staring up at her forlornly while you single them out for attacks.

You can fight on the ground, but Kat's standard three-hit combo does relatively little damage, and is infuriatingly difficult to land on taller enemies. A precious few late-game enemies demanded the occasional dodge - achieved by a swipe of the screen - or ranged combat but you can make it through the majority of the game, including a fair few of the boss encounters, using only the flying kick. Overall, the combat feels like it was meant to play second fiddle to the game's exploration and movement mechanics, and it's notable that you never encounter any enemies outside of story missions.

It's commendable that the camera almost manages to keep up, given how often Kat ends up upside down, but it responds poorly to sharp turns and nearby geometry. When she's standing on a solid surface, Kat's hair will always point downward to keep your orientated, but there's no such visual clues when you're airborne, making it very easy to lose your bearings.

It doesn't help that the camera is partially controlled by the Vita's motion controls. In theory, tilting the Vita should tilt the camera, but it's a rather temperamental system. Sometimes shifting your weight, or adjusting your hands will do nothing, other times it'll send your reticule skyward, or cause you to look at directly at the ground while you're trying to line up attacks. You can also make Kat slide along the ground at speed by pressing down on the corners of the screen and tilting the Vita to steer. It's a touchy system made worse by Kat's habit of getting stuck on corners. Unfortunately, none of the motion controls can be turned off.

The controls and combat aren't bad, by any stretch of the imagination, but they're the weakest aspects of an otherwise astounding game. The world of Gravity Rush is intriguing, it's characters likable and its visual design is top notch. With a little more polish, more imaginative use of its central gimmick and less by-the-numbers combat it could have been great. As it is, Gravity Rush is just good.

Bottom Line: Despite a few control hiccups, Gravity Rush succeeds on the strength of its excellent movement system and endearing protagonist.

Recommendation: Gravity Rush is a flawed gem that still manages to be one of the most engaging, likable and brave games on the Vita. It's certainly worth your money.