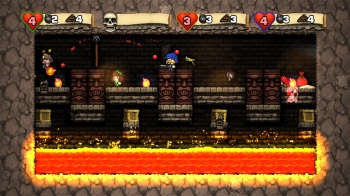 I can describe the exact moment you'll give up on Spelunky.

You'll be at the very first level, having just died, yet again, at the hands of a giant spider/wasp/frog lurking in the bowels of the game's lower levels. Once you've finished mourning the last thirty minutes of your life the game just callously cast aside, you'll start making your way through the first level yet again. Then you'll come across a pot, smash it open, and the snake hiding inside the pot will bite your face, sending you spiraling into a spike pit. That, my friend, is your cue to storm out of the room.

You'll be back a few hours later.

Spelunky is a 2D platformer that heaps misery upon the unobservant, the hasty and the ignorant. You take the role of a diminutive treasure hunter, intent on retrieving some legendary loot from a haunted cave. Between you and said treasure is an army of spiders, snakes, mummies, aliens and yetis, all of which take a hard-line stance against the theft of cultural artifacts. Die at any point, and you're dumped unceremoniously back at the beginning of the game, bereft of your weapons, money and progress. The only thing you get to keep is knowledge, represented in the game by a journal which is slowly filled out each time you encounter a new enemy, trap or item. That sense of self-improvement is what will keep you coming back to Spelunky, even as your death count reaches the four digit mark.

The relative ease of modern gaming has given rise to a genre where difficulty is the goal. The humble platformer, known for its drawn-out love affair with the bottomless and/or spike-filled pit, is generally the genre of choice when it comes to "masocore" gaming. On the surface, Spelunky closely resembles some of the entries in that particular genre. It's savagely difficult, relentlessly punishing, mechanically immaculate and profoundly rewarding. The key difference is that while Spelunky will certainly appeal to those who want their platforming chops busted, there's plenty here for the less-skilled gamer as well.

Every level in Spelunky is randomly generated, with different items, shops and treasures scattered throughout, and they can all be tackled in different ways. You start the game with a set of ropes, which can be thrown straight upwards and then climbed, and bombs, which do exactly what you might expect. Being able to bypass a trap by blowing a hole in the floor is super satisfying, and learning to weigh your precious supply of items against the risks or rewards posed by a given situation is a perfect example of why Spelunky works so well. It isn't about how far through the game you are, or how many items you have, it's about how much you know.