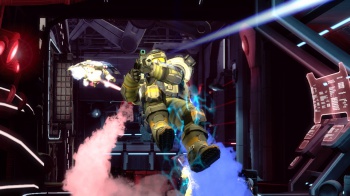 The latest game from Scribblenauts studio 5th Cell and part of the Xbox Live Arcade's Summer of Arcade, Hybrid is an online, multiplayer 3rd-person shooter that shines for its innovative jetpack movement system and fast-paced, highly tactical gameplay. As the game never really gets around to explaining what exactly is driving all of this fighting and zooming, however, the whole experience loses its sparkle almost as quickly as your character zips across the map.

You join Hybrid's real-time global war metagame as a member of one of two opposing factions, playing out your part in this apparently epic struggle through three-versus-three multiplayer matches that span seven modes and ten maps. The setting for the game - inasmuch as there is one - is based on a war over Dark Matter raging between the human, all-male Paladins and the half-alien half-not Variants (there is virtually no difference between the two sides beyond their outfits). New weapons and helmets become available as you gain XP and level up, though the fact that you can skip the grinding and instead buy items from the game using Microsoft Points does dampen the sense of achievement.

The thing that makes Hybrid stand out from other shooters is its smart twist on cover-based gameplay. You can't walk in this game; your movements are restricted to either sliding around behind bits of cover, or using your built-in jetpack to fly from one piece of cover to another, shooting, reloading, and changing direction as you go. Said pieces of cover dot the walls, floor, and ceiling of every map, creating spaces that are relatively easy to navigate once you get a handle on the whole flying thing. While it does feel a little weird at first, the game's intuitive, well-balanced controls means that after a few rounds you'll find yourself zooming, swerving and dodging with the best of them.

Never shall you dodge alone, either: Hybrid provides you with up to three robotic drone companions at any one time, unlocking more powerful models as you rack up your kills. All three are autonomous, with the little Stalker sticking to your side like glue, the big Warbird hulking towards your enemies in a fashion that sometimes seems suicidal, and the insta-kill Preyon racing off towards the enemy of your choice as soon as it's spawned. Correctly deployed, the three have the power to seriously disrupt a match. Used incorrectly, however, they don't do much beyond tell everyone where you are.

Combined, these mechanics serve to effectively reinforce the game's commitment to fast-paced, frantic shooter gameplay. The game asks you to make quick decisions at all points, even going so far as to ask if you'd like to change your equipment loadout before every respawn. Thanks to this set-up, camping, for instance, is not an option at all. Grenades, one of your character's various interchangeable abilities, are deadly effective and come in a variety of flavors designed specifically to stop anybody from staying still for more than a minute. Dude over in the corner looking a little too entrenched with his four drones and two friends? Easy. After you've died, change your ability to the grenades that hack drones, head back, watch their previously-faithful drones turn on them with a viciousness even you find slightly disturbing, and move on. At its best, Hybrid always tries its hardest to ensure that you can achieve your minute-to-minute goals with a minimum of fuss, usually with a great deal of success.

The downside to all of this frantic, super-fun gameplay is that it doesn't ever really change. While there are basic differences between the game's seven modes (futuristically-named versions of Capture the Flag, Hold the Fort, and so on), the basic aim is more or less always about killing the other guys before they kill you. As all of the maps are small and use very similar colors and styles, with several of them even sharing the same basic layout, the game can start to feel like you're just repeating the same actions over and again before long. Odd as it sounds, the lack of variation it presents after the first few hours starts to make all of the frantic jetpack adventuring feel almost boring.

While it doesn't seem to be a huge problem initially, the point at which you start to get a little bored with Hybrid's maps and constant death is where the lack of context rears its head as a genuine issue. Without the motivation normally provided by story or character development, the game starts to lose all sense of significance. The rewards for continuing to play are better guns and fancier helmets, but you have to ask, what for? The basics will remain the same.

It's worth noting that the game will remain interesting past this point for players who are fans of its metagame world map and accompanying clans, forums, and social clubs, which have spawned a fairly close-knit online community. Without getting involved with the meta side of Hybrid, however, most other players seem pretty content to simply continue having fun and pelting drones at one another in deathmatches. That they'll still be doing that a month from now, however, seems questionable.

Bottom Line: Hybrid is a fast, fun, and innovative online shooter that is hampered by repetitive gameplay and a world so vague that it stops you from ever really understanding it.

Recommendation: If you like your shooters fast and tactical, this one's for you; the sheer speed makes it perfect for filling that spare half-hour before you leave for work. If you're after story, immersion, replay value or longevity, however, you won't find what you're looking for in Hybrid.