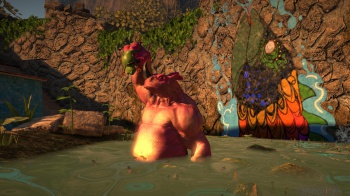 Papo & Yo (PS3) is a difficult game to play. I don't mean that in the traditional gaming sense of awkward controls or challenging puzzles, though sometimes that's true, too. I mean that its story of a boy trying to rid a Monster of his "curse" - an addiction that causes him to become mindlessly violent - is at times genuinely hard to watch. The world of Papo & Yo isn't comfortable, but within it lies a reality that we don't often see in games. As a game, it stands up as a whimsically creative puzzler, but its impact goes beyond its strict entertainment value.

The young protagonist of Papo & Yo is Quico, who finds himself burdened with an enormous pink Monster companion. The local shaman might be able to cure Monster, so Quico sets about leading him through a landscape that blends the world of Quico's reality with that of his imagination, adding chalk-drawn levers, gears, and winding keys to buildings and streets. We see the world of Papo & Yo through a child's eyes, as the mundane becomes magical. Stairs appear out of thin air. Buildings grow legs and walk across the street. Boxes hover in mid-air, acting as stepping stones to floating lakes. If you've ever looked out the window and daydreamed your unhappiness away, you'll recognize much of Papo & Yo's landscape.

These chalk drawings are your tools for solving the puzzles of Papo & Yo and though they remain consistent throughout the game, the way they're applied is always fresh and ingenious. Activating a gear will always do something important, but what that something is varies dramatically. Buildings will rise, fall, or disappear entirely. Perhaps a coconut tree will suddenly appear, or a bridge will extend. You'll see the same switches and keys over and over as you progress through the game, but the puzzles never stop being intriguing because you simply don't know what to expect. Your goal is almost always just to get from one side of the level to the other, but the methods you'll use to make the trip constantly change. This time, a turn of a key causes the floor to tear away and curl up like a wave. Another time, it made shacks fly and stack on top of each other to form a bridge. The creativity is dizzying.

Part of the challenge of Papo & Yo's puzzles is figuring out how to get Monster where he needs to go. He's not as nimble as Quico, and won't jump, climb ladders or walk up stairs, so you'll have to solve plenty of environmental puzzles to clear a path for him. Monster is an oddly bland companion. He can activate special switches when you lead him to the right spot, and if he's snoozing you can jump on his belly to reach high ledges, but mostly he just lumbers around looking for coconuts. He's the entire point of your mission, but he's just sort of there in the background while you do all the work.

Things change when Monster indulges in his favorite meal, a frog, and we see the toll his curse takes on him and those around him.. Frogs turn Monster into an out of control fiery beast intent on pummeling Quico. And that's where Papo & Yo becomes difficult. Even if you ignore the subtext it's clearly referencing, it's hard to watch a child screaming in pain as Monster flings him across the screen. Which, of course, is as it should be, but solving puzzles takes experimentation; when that experimentation can lead to Quico's suffering, it's hard to blithely just pull every lever and see what happens. As a message about child abuse, it works perfectly, but as game design, it's not entirely successful.

Even when it's focused solely on puzzle solving, Papo & Yo's sloppy controls and unfortunate camera angles can cause it to stumble. Some jumps you'll make with ease, while others are stupidly fussy, and trying to get a good view of your surroundings is frequently harder than it should be - or just plain impossible. It's easy to assume you haven't found the solution to a problem when in fact it's just the controls getting in the way of your success. I spent two hours trying to figure out a puzzle that I actually had solved after about two minutes, but just couldn't find the exact alignment I needed to land a particular jump. Whee.

Even with its difficult subject matter and occasionally malicious controls, Papo & Yo still manages to be endearing. It's wonderful to spend time with a kid in a game that actually acts like a kid - no emo whining, no amnesia, and no overwhelming destiny. Just his favorite toy, his neighborhood, and his imagination. The game is a testament to a child's ability to weather the darkness of the real world, but its subject matter may resonate a bit too strongly for some players.

Bottom Line: Papo & Yo isn't always pleasant, for reasons both technical and emotional, but its cleverness is exceptional. It's a world of pure imagination, for good and for ill, and while its puzzles aren't the most challenging you'll find, their presentation is so unusual that you'll race through them just to see what comes next.

Recommendation: Mentally ready yourself for controller hang-ups - not to mention emotional subject matter - and give this a go.