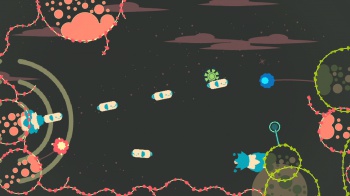 At its most basic level, Sound Shapes is a simple platformer with one cardinal rule: Red stuff kills you. You control a small ball suspended in some form of indiscernible goop that allows it to stick to surfaces and creatures of the same color. Holding the right trigger turns the goop off, reducing the ball's friction, and allowing it move faster and jump further at the expense of fine control. Switching between the two states to stick to and drop from platforms is the central theme, and once you've gotten that down, you've pretty much mastered the mechanics.

That isn't all there is to the game, however. As the title might imply, sound, and specifically music, is the driving force behind Sound Shapes. The game's levels are split into a number of single screen challenges, each dotted with collectable "notes." Each note you collect adds a corresponding note to the level's music, meaning your progress isn't just marked by changing visuals, but also by the evolution of the soundtrack. Hazards, platforms, enemies, and indeed anything that moves adds its own complementary sound sample to the mix, giving each screen its own musical arrangement. It's a simple, but refined system that rewards you on two fronts.

The interplay between the music and the platforming is - sorry - pitch perfect. 2D platformers, particularly the kind with a reliance on shifting platforms and strict timing, are inherently rhythmic games, and Sound Shapes perfectly captures this concept and builds on it. The game's tracks, provided by a fine selection of industry talent, harmonize with the onscreen action in a way rarely seen or heard in gaming. Sound Shapes isn't hard, largely thanks to generous checkpoints scattered throughout the levels, but some of the individual screens can be challenging until you grasp their particular rhythm.

The game's 20 levels are split into five albums, each provided by a different artist/musician combo. While none of the albums stray far from their platformers roots, each brings something new to the table, and some explore entirely different subgenres. The relaxed, animation-heavy puzzle solving of CORPOREAL stands as my favorite, though platforming fiends will likely feel more at home with the challenging 8-bit-inspired ledge hopping of D-Cade.

You can complete Sound Shape's campaign in the course of an afternoon, unlocking designs and objects to be used in the included level editor. There are extra-hard bonus levels that have you collecting randomly-placed notes in remixed screens from previous levels, but without the clever gameplay/music interplay, these are distractions at best. You can also play a selection of challenges designed to test and improve your pitch and beat recognition, or you can move straight on to the user-created levels and the level editor.

The editor is intuitive but limited in scope. You can mix and match any of the items and samples you've collected from the game's albums, but what you can do with them is strictly controlled. While other creatively-orientated games encourage you to experiment with mixing up the core gameplay, Sound Shapes provides a very focused creative experience. Similarly, there isn't too much you can do with the visual elements you're provided; many of the assets are locked to certain layers, meaning you can really only revisit the design directions of the included albums, rather than create your own. This isn't necessarily a negative. Sound Shapes would work, even if you were restricted to the simple solid color graphics of the tutorial, but the lack of meaningful customization options may bother players coming from the likes of Little Big Planet or Trials Evolution.

The user-generated levels seem to promise nigh on infinite content, but the interplay between music and design that the best Sound Shapes levels achieve is a difficult thing to master. I was unable to log on to the game's online service for most of the five days I had with it thanks to some frustrating server issues. When I finally managed to get online, I found that many users knew how to design a good level, and a fair few knew how to put together a good tune, but very rarely did I come across someone capable of doing both. There's a lot of potential in Sound Shapes' basic design, and while it may take some time for users to unlock all of it, it'll certainly be worth it when they do.

Bottom Line: With a striking core concept and a seemingly limitless potential for additional content, Sound Shapes will make an excellent addition to your Vita library.