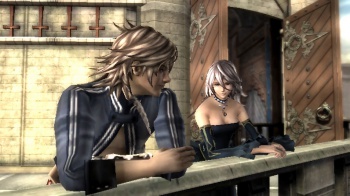 With the Wii on the way out, North American JRPG fans get a fitting swan song in the form of The Last Story. With a dramatic story, an affable cast of characters, and one of the best battle systems in years, The Last Story is a bittersweet farewell: a fitting end for the Wii's JRPG library, and a pointed reminder this small catalog had the potential to be so much more.

Kind, adventurous Zael and five of his friends work as mercenaries on the war-torn Lazulis Island, but dream of being knights in service to the stately Count Arganan. After a series of mishaps that culminates in a pitched naval battle, Zael and company find themselves hot on the trail of the evil warlord Zangurak, who seeks an ancient magical force to empower his disenfranchised people. As the plot advances, our heroes grapple with mistaken identities, love triangles, last-minute betrayals, and just about every other trope a JRPG wouldn't feel complete without.

While on paper, the narrative sounds about as clichéd as they come, The Last Story pulls it off with remarkable acuity thanks to excellent pacing, strong characters, and short, informative cutscenes. There's nothing particularly novel about Zael becoming a de facto chosen one, or his budding, awkward romance with conflicted noblewoman Calista, but a charming script and constant story advancement keep the plot from tripping over itself. Listening to Zael and his compatriots banter back and forth about booze and muffins is perhaps even more engaging than learning about the climactic war that split the world's sentient races apart. Buoyed by some inspired voice acting, Zael's companions - which include a driven swordsman, a petulant mage, and a hard-drinking young lady with a penchant for dual knives - are not terribly deep, but have recognizable personality traits, funny dialogue, and complete character arcs.

The fact that the game never gets bogged down in overlong story minutia is thanks, at least in part, to its innovative combat. The Last Story features fights which embrace the chaotic, fast-paced tempo of a typical action game without sacrificing the kind of strategic gameplay that RPG fans expect. Eschewing turn-based gameplay, battles generally involve Zael's six-person party, a variety of enemies, and a large battlefield full of places to hide, staircases for leaping attacks, and multiple points of entry for flanking or pincer strategies.

In order to perform a standard attack, Zael simply needs to approach an enemy, at which point the two will go at each other until one of them keels over. As this happens, the rest of the party will generally keep to their own devices, attacking, guarding, or casting magic. The party AI is competent and doesn't need much micromanagement, but you can still pause the game and issue "attack," "magic," or "flee" orders as necessary. As the game progresses, your options will expand, but so will the number of tactics you need to remember. Dodging attacks by rolling away can negate a lot of damage, while hiding behind cover and striking an approaching enemy unawares may take him out in a single hit.