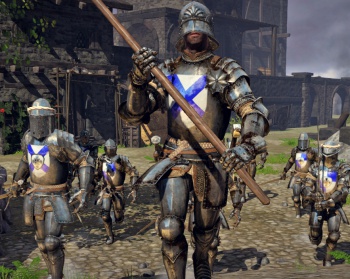 The War of the Roses was a 15th century conflict between the royal houses of York and Lancaster for the English throne. It's also the backdrop for Paradox Interactive's new third-person online action game of the same name. The setting is historically accurate but almost entirely superficial, and for all practical purposes exists only as an excuse to allow players to inflict truly medieval levels of violence upon one another. It's no exaggeration to say that I don't recall any game that's quite as gleefully vicious as this one.

War of the Roses doesn't start off very well. The opening menu is bland and dull, the monochromatic server browser is functional but nothing more and the graphics, even with the settings cranked up, are flat. Entering the single-player tutorial mode does nothing to improve things. It's handy for testing key mappings, learning basic functions like climbing ladders and applying bandages, and getting a feel for character movement and some of the game's many different weapons. But the AI ranges from bad to broken and spending more than a few minutes with it will likely just convince you that you've made a terrible purchasing decision.

All of that is rather suddenly forgotten the first time you charge into a 32-player online fray and bring your sword crashing down on some poor schmuck's head. War of the Roses is all about thick, meaty, multiplayer combat and it does it very well indeed, almost well enough to make you forget about its shortcomings. Men and horses crash together, dark red blood gushes freely and fallen soldiers squirm and beg for mercy, but it's the wet, crunchy sound of blade and club meeting skin and bone that really sells it. This game is visceral.

Combat can be frantic, but there's more to it than just flailing your mouse and clicking wildly. Melee attacks must be charged up and aimed to be effective, and each weapon is carefully modeled to reflect its particular strengths and weaknesses. Two-handed axes can dish out devastating amounts of damage but are almost useless up close, and a suit of full plate won't do much to protect you from a dagger jammed into your eye. Conventional bows are quick to draw but difficult to use effectively, while the crossbow is murderous at any range and almost as likely to get you killed while you're reloading it.

Falling on the field of glory doesn't necessarily mean game over. "Instakills" happen occasionally, but most of the time being cut down in battle leaves you wounded but still alive and able to be revived by your cohorts - unless an enemy finishes you with a gloriously grisly "execution" first. Shields crush throats, broadswords impale and twist, and daggers dig into brains, all witnessed from a first-person perspective complete with screams, gurgling and an awful bone-grinding noise that signals the end of your days.

The game's advertising boasts that "skill is not an unlock," but just about everything else in War of the Roses is. Virtually every action, from healing your cohorts to capturing enemy control points, earns experience points and gold, and once you've accumulated enough of both you can begin to build your own unique character. The number of customization options is impressive, including five different classes of perks, primary weapons, sidearms, shields, armor, heraldry and more. It's a system that dooms new players to frequent, ugly deaths, but even so, persistence pays off. Access to higher-level classes and customization comes fairly quickly, and even the lowly Footman can cause trouble if he's handled properly and picks his fights carefully.

There are bugs, including some random crash-to-desktop issues, and the absence of any kind of map can make navigation a challenge. There's also no health meter of any sort; a "ten seconds to bleed-out" warning tells you when you've suffered a particularly grievous wound, but otherwise you're given no indication as to the extent of your injuries or how much longer you can stay on your feet. Perhaps most problematic is that there's just not a whole lot to see. Team Deathmatch gets tired in a hurry and with only seven Conquest maps to choose from, it's very much a one-trick pony.

But what a trick it is. War of the Roses offers an unusual and intense twist on team-based online combat, and what it lacks in features and polish it (mostly) makes up for in flexible, skill-based melee combat and unapologetic, wanton brutality. For all its bumps and blemishes, it's an awful lot of fun.

Bottom Line: War of the Roses is shallow and unrefined, but if you want what it's got then you'll have a great time with it.

Recommendation: If you haven't already decided that you want this game, then you should probably wait for a demo or a Steam sale.