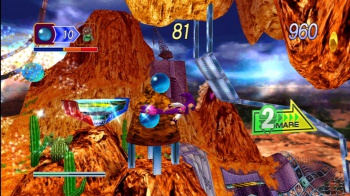 Calling NiGHTS into Dreams a cult classic would be an extreme understatement: If you weren't around for its first release on the Sega Saturn in 1996, chances are you've still heard of it. And yet, despite being one of the most highly praised games that Sega has ever published, most gamers will tell you that they've never actually played it. This inconsistency has frustrated many fans of the series, begging the question of how good a game it really was. Fortunately, the game's recent HD rerelease on XBLA and PSN provides the perfect opportunity for a curious modern gamer to finally get to the bottom of this mystery. And rest assured, NiGHTS is a puzzle worth solving.

You'll play mostly as NiGHTS, a flying purple jester of somewhat secretive origin. NiGHTS is a resident of the Night Dimension, a dream world that millions of sleeping Earthlings visit each night as they slumber, and he's going to need your help to save both his world and yours. A great evil has spread across the once happy land of Nightopia in the form of a tyrannical ruler, Wizeman the Wicked. Wizeman wants to steal all the dream energy that human beings produce, a resource called Ideya that would make him powerful enough to spread into the waking world, spelling doom for Nightopians and human beings alike. Of course it's your job to stop this nefarious plot, so with NiGHTS as your ally you'll set off into the Night Dimension, bent on overcoming your Nightmares and taking back some stolen Ideya.

Gameplay in NiGHTS is very simple at its core, but do yourself a favor then check out the game's "How to Play" in its menu screen before starting, otherwise you'll probably be more than a little lost. Levels are broken up into a series of seven dream worlds, each a variation of your character's delirious quest. The worlds feel huge, many of the tracks looking like twisted floating islands hanging in the sky, though it can be kind of hard to tell sometimes.

You'll begin each level as either Elliot or Claris, two young kids with the power to venture into Nightopia. Right after the dream begins you'll be assaulted by four random creatures, each ready to gobble up a bit of your precious Ideya. After that you'll merge with NiGHTS and fly around a mostly linear 3D loop until you've gathered enough Ideya orbs to kill the creature and complete the level. You'll have to hurry, too, since you're given a very limited amount of time to finish each one - extremely limited considering how great an urge you'll feel to linger in one of this game's veritable theme park of beautifully wrought distractions. Once you've cleared all four levels in a given dream world you'll be invited to face that level's variety of sinister boss, the Nightmaren. They tend to resemble your average scary monster under the bed, which makes a lot of sense considering that the two playable characters are children.

The majority of your time will be spent guiding NiGHTS as he floats, glides and loops through a variety of orbs and rings in order to collect points and acquire power ups. Flying feels fluid, like you're swimming effortlessly through an open pool, every object ready to burst gently beneath your touch or to join you in your ecstatic spiral. Each level is highly dynamic, prompting you to progress not just from point A to B, but also to find new ways to circle around and through the space in the allotted time. The impetus not just to complete the level but to do so well is even further reinforced by the lettered grading system at the end. Since there are no save points in a dream world, you'll have to race through every level inside it back to back without dying in order to face and defeat that dream's final boss. Simply getting to and slaying Wizeman will be a struggle in itself, but attempting to take him out with a decent grade may legitimately give you gray hairs. The effort you'll spend doing it, though, will seem well invested as you congratulate yourself over that barely passing C.

NiGHTS isn't a cheap thrill, either. Rather than having a hollow storyline loosely tie together a series of excuses to murder people and open boxes, NiGHTS has a seriously thought-provoking plot about identity, consciousness and the nature of fear. You're not just some random adventurer; you're a scared little kid who's not quite sure if you believe in yourself yet. Ideya isn't just some miscellaneous currency, but a symbol of courage, hope, purity, growth and intelligence, all virtues of the human spirit. Thus, when you're going about the process of reclaiming your Ideya and defeating the game's bosses, you're acting out a triumph over your metaphorical fears as well. Claris, for example, is searching for the strength to audition as a singer and every dream boss she defeats puts her one step closer to achieving that personal goal. What's more, the game doesn't shove this plot down your throat - instead you're invited to gradually make sense of the enigma yourself by examining the gameplay at work, culminating in an extreme sense of personal pride when you finally do manage to restore order to the world.

Bottom Line: NiGHTS into Dreams is a meaningful game wrapped in a package of challenging yet thoroughly enjoyable gameplay.

Recommendation: This game is both fun to play and an important piece of gamer history, making it well worth the download.

This review was based on the XBLA version of the game.