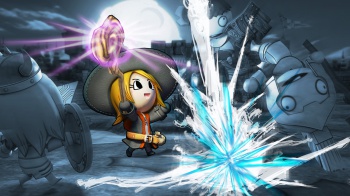 The war over whether the free-to-play model is the future of gaming - or even a viable alternative to traditional retail releases - has finally reached the Xbox 360 with the release of Happy Wars. Unfortunately, while the lighthearted hack and slash title offers a good bit of pick up and play enjoyment, those that argue free-to-play really means pay-to-win will have plenty of ammunition for criticism.

Happy Wars features two main modes: A thinly-plotted story mode that follows various battles between two kingdoms and an online multiplayer mode that pits teams of 15 players against each other as they struggle to take down the opposing army. You accomplish this task through real-time battles to control spawn points - in the form of towers - and matches end when one team eventually breaks in to the opposing army's castle and destroying its last and largest tower. The multiplayer battles are very clearly the meat of the package, with the campaign adventure serving little purpose beyond fleshing out your combat skills.

At the beginning of each skirmish - as well as each time you meet an untimely demise - you are given the option to choose between the Warrior, Cleric, and Mage classes. Warriors specialize in brute force attacks, Mages can utilize ranged magic spells, and Clerics have the ability to construct large offensive and defensive structures. A successful siege is reliant on a healthy mix of these classes within your army's ranks, but when playing online with 14 strangers this is all too often not the case.

It can be frustrating to see your fellow soldiers playing without regard to the main objective. Having a competent crew is entirely based on matchmaking luck, unless of course you have 14 friends willing to team up at the same time. Expect to see your teammates running in the wrong direction, getting distracted by objects in the environment, and just generally disappointing you in every way imaginable. It's hard to hold the game accountable for the ignorance of your randomly-matched teammates, and when placed on a competent team the frantic battles can be fun and fast-paced. Unfortunately, Happy Wars has several gameplay issues for which there is no excuse.

As simple as the concept may seem at first glance, it actually takes a good amount of strategy to play the role of a successful soldier. Every class has a number of special attacks that require action points to perform. These points automatically regenerate over time, meaning that you'll constantly have to keep an eye on your AP bar. The icons for each special attack become grayed out when you don't have enough AP to utilize them, and sometimes you'll get a cooldown animation to show you how long you have to wait before using it again.

I have to emphasize "sometimes" here, because the cooldown animation is just plain broken for many of the attack icons. Most times, the attacks will just pop into color when available, with no animation of any kind. The AP bar has no dashes or measurements to tell you how many points each attack uses, and the icons for these special moves are in the opposite corner of the screen from the AP bar itself. You'll end up having to glance at both the upper left and bottom right edges of the screen way more often than you should, and in a game where you can be killed in less than a second, taking your eyes off the battle is the worst thing you can do.