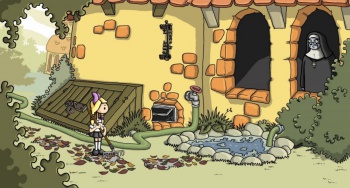 Edna and Harvey: Harvey's New Eyes is a solid, well-built adventure, but don't be fooled by the cartoon-like visuals: It's a dark trip to a very strange place where happy endings are in short supply.

Despite the title and the fact that it's a sequel to last year's less-than-smash-hit Edna and Harvey: The Breakout, Harvey's New Eyes actually follows the adventures of Lilli, a small, near-mute blonde girl living in a convent school. Lilli is the most virtuous child in the entire world, and yet her life in the convent is not an easy one. Her relationship with most of the other students is tense at best and she's frequently the target of the Mother Superior's quick, irrational rage. Her one and only true friend is the older and much more talkative Edna, but when Edna goes into hiding to escape the clutches of a lunatic child psychologist, life gets complicated. Lilli must first aid her friend's escape from the convent and then track her down to discover the secrets she's hiding, and possibly learn a thing or two about herself in the process.

Harvey's New Eyes deviates very little from the standard adventure formula, with lots of pointing, clicking, using this on that and strange conversations with oddball characters, all explained in a very thorough tutorial that offers novices a gentle introduction to the genre. There are a couple of examples of "adventure game logic," such as having to knock a beehive down a well before you can turn on the hose to fill it, and the lack of an autosave is a point of potentially great frustration, but on the whole it's very straight forward and simple. The four or five "mini-game" sequences that require you to fulfill some task of logic or strategy can be skipped with no greater penalty than the loss of a few Achievements, scene exits are directly accessible with a double-click and while there's no map, the levels are small enough that you won't need one. Masochists looking for a Sierra-style descent into cause-and-effect madness will likely come away disappointed, but gamers less inclined to self-flagellation will find it a pleasantly fast-paced experience.

A big part of the fun of Harvey's New Eyes is enjoying its impact unspoiled and it's difficult to say too much about the game without dropping spoilers, but the twist is no secret: Lilli has a dark side. She's what you might call an accidental mass murderer. She never intentionally kills anyone and in fact she thinks quite fondly of most of her fellows, even those that don't exhibit the same feelings toward her. Yet people have an odd habit of dying whenever she's around. Lots of people. In horrible ways. And if Lilli seems unperturbed by it all, it's probably because she's distracted by all the cute little gnomes who follow her around, painting her world a lovely shade of bright pink.

The visual style is kind of a trippy Dr. Seuss: simple, bright, bold and weird. The hand-drawn art is neither realistic nor particularly consistent in its depiction of characters, but it's ideally suited to the game's quirky nature. The soundtrack is far more conventional and obvious in its excellence but every bit as eclectic, leaping from blues to Gothic organ music, high-energy Hollywood instrumentals and even downtempo electronica, and the voice acting is strong, particularly that of the narrator, who enthusiastically chews through every one of his lines. Even the theme song, performed with an adroitly disturbing touch by the same artist who did the brilliant Deponia title track, is excellent, if somewhat more sinister than slapstick this time around.

That actually sums up the entire game quite nicely. At first blush, Harvey's New Eyes looks like a light-hearted cartoon romp that will follow closely in the comedy footsteps of Deponia, but it really isn't. It's surreal, it's shocking at times, it's profoundly bizarre, but while there are one or two laugh-out-loud moments, it's just not funny. It's possible that something was lost in translation from its original German, but intentional or not, this is a very dark and disquieting game.

Only two technical issues popped up during my time with the game, both related to subtitles, one which was still in German and another that was completely absent, and if that seems like a minor quibble it's only because there's very little of any significance to complain about. Harvey's New Eyes is well-produced, technically solid and fascinatingly weird. It's definitely not for everyone, particularly those of you who are sensitive about things like, say, driving children to suicide. But as a freakadelic trip down a brazenly strange rabbit hole, there's just nothing else like it.

Bottom Line: Edna and Harvey: Harvey's New Eyes is deep, dark and twisted. If that's your thing, this is your game.

Recommendation: It's another fine adventure from the land that does them best, but people with a strong streak of "that's not funny" should steer well clear.