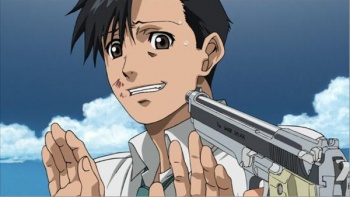 Unfortunate incidents in Somalia aside, the mystique of piracy and organized crime still appeal to modern audiences as action entertainment. Based off Rei Hiroe's manga of the same name, Black Lagoon is about a gang of modern day mercenary pirates and their PT boat - the Black Lagoon - who earn a living running errands for various criminal groups (somewhat reminiscent of my former job as an office courier, except my clients and coworkers usually did not try to shoot me).

Set in Asian slums and waters, the adventures of Black Lagoon's first season are told in short chapters spanning one to three episodes apiece. Each chapter entails the Black Lagoon crew delivering precious cargo to one criminal group, while fending off rival criminal groups who are also interested in obtaining said cargo. While repetitive, the setup works as a device for Black Lagoon to show off its witty character interactions and blazing gunfights.

The crew of the Black Lagoon is comprised of stock action film characters: Dutch the military veteran, tech genius Benny, supercilious action girl Revy, and Rock the new recruit, who possibly suffers from Stockholm Syndrome. The characters receive limited character development through one liners or brief flashback sequences, but also tend to break out of their stock action film character shells when arguing with each other. Their debates over moral codes, job responsibilities, and who had the worst upbringing help flesh out their personalities, and occasionally offer glimpses into their psyches.

In a rare instance of the archetypal wimpy anime male actually being essential to the show, Rock's objections serve as a foil to the immoral and violent punks of the show as they get morality pounded into them. Clashes between Revy's "kill everyone and take everything" mantra and Rock's doses of diplomacy and rationality are particular highlights.

Critics who complain about a lack of strong female characters in media can eat crow thanks to arguably the strongest feature of Black Lagoon: its strong female characters. More than visual eye-candy for the male audience, the female characters of Black Lagoon each have a unique style and manner during conflict. Never ones to play damsels in distress, Revy and the other female hired guns are strong enough to take on platoons of cartel goons, neo-Nazis, terrorist cells, and even their less motivated male coworkers. If direct force isn't your cup of tea, you have Balalaika - who shows her strength by leading troops of elite soldiers as the head of the Russian mafia front supporting the crew of the Black Lagoon.

This becomes a double-edged sword for Black Lagoon: The strong women are almost too powerful. The moment Revy or any other female character enters a fight, we know whoever opposes her will horribly lose.

Despite the females wearing their impenetrable main character shields, the gun battles are still spectacular. Occasional impossible feats of anime aside, the action sequences are executed in an over-the-top style matching the quality of Hollywood films. Revy pays homage to Hong Kong gun-fu combat with her two Berettas as she delivers a flurry of bullets and death. A climactic chase in one chapter feels just like Terminator 2, only with a housemaid replacing the T-1000. The high quality sound of gunfire including clinking spent casings and the satisfying KA-CHNK of each shotgun pump is excellently recreated and adds to the action. As Black Lagoon takes place over international waters, naval combat provides exciting chases and well-executed strategies.

I was hooked into Black Lagoon long enough to finish the first season - the animation and character designs are wonderful. The English dubbing is passable, though features more swearing than you'll get with the subtitles. It would be nice to see the repetitive formula of "Deliver cargo A to criminal group B while shooting criminal group C" give way to more interesting plots that delve into other aspects of the criminal underworld; I've heard that this is the case in the second season. With just twelve episodes per season, Black Lagoon is a quick and enjoyable series to watch before deciding whether to dive further into the show.

Bottom Line: As an homage to action films, Black Lagoon's over the top gun battles with an interesting peek into the world of mercenaries and organized crime help counter its repetitive plots with predictable plot resolutions.

You can spot Tom Tonthat at an anime convention cosplaying as Mister Chang of the Triads and photographing Revy cosplayers.