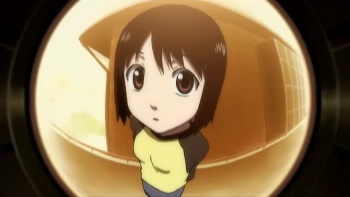 Welcome to the NHK is an anime about hikikomori - college dropouts who hide in their apartments and withdraw from "normal" society. The hikikomori phenomenon is growing in Japan, and this anime takes a post-modern look at what makes people turn off and drop out.

Sato, the hero of the series, is not happy. He hides in his apartment all day, and his anxiety keeps him away from social contact. His isolation has made him have weird fantasies about a conspiracy by corporate media to make a new society of shut-ins to exploit for ... something or other; it's not really clear. The longer Sato is alone, the less sense his delusions have to make.

Sato has several adventures related to his shut-in lifestyle. He becomes hooked on internet pornography. His mother calls and says she's coming to the big city to visit him - so Sato has to clean up both himself and his apartment, and (gasp) pretend to have a fiance! Hilarity ensues? Yes, and no. If the anime were only about Sato's paranoid fantasies about arguing with his air conditioner or his misadventures with underage-lolita pornography, then Welcome to the NHK would be just another situation comedy.

The framing device for most of the series is Sato's encounters with Misaki, a young woman who makes him promise to sign a contract: Each week, Sato must meet Misaki in the park for a therapy exercise, designed to cure his hikikomori anxiety. At first, Sato goes to great lengths to deny that he's a shut-in ... but in later episodes, he's forced to come to terms that he's not getting any better by himself.

Welcome to the NHK, at its core, is about real people with real problems. Sato's panic attacks when he goes out in public are realistic phobias. When Sato has one of his frequent fights with his neighbor, Kaoru, the animation direction doesn't use a lot of cheap squash-and-stretch hyperbole, or "shojo hammers" drawn from nowhere - instead, the characters gesticulate wildly, they yell and scream, but it's all stuff that's grounded in the real world. Every now and then, Sato lapses into one of his delusions; the dramatic shift in animation style gives these infrequent moments a powerful kick.

Being stories about young people, the characters' age differences add dramatic complications. Misaki attempts to use dream interpretation to help Sato by using an intro-to-Freud textbook. Sato, as a college dropout who's very familiar with Freud, amuses himself at her expense: "I had a dream about a long, hard snake, and it plunged into the ocean, again and again. What does that mean?"

Age is more important when Sato reunites with Hitomi. In Sato's past, he and Hitomi were the only two people in the school literature club, but she was two years ahead of him ... and two years' difference, in high school, is huge. Hitomi uses this little edge in worldly sophistication to take advantage of Sato, which contributes to his isolation anxiety in his later life. Years after high school, she's a gainfully-employed civil servant with a boyfriend - everything that is not hikikomori. When Hitomi wanders back into Sato's life, he drops everything for her, to prove that he's not a hopeless shut-in. Ironically, Hitomi is way more depressed than Sato himself is.

A recurring theme is how characters are dishonest with their feelings. Sato's anxiety disorder often keeps him from admitting the truth to other folks - he's ashamed of being a shut-in, so he makes up excuses that lead to plot-length misunderstandings often seen in situation comedies. Misaki has encyclopedic knowledge of Sato's life, but she is deliberately obtuse about who she is and where she comes from. Kaoru vacillates between loud diatribes about how fake people are, how the concept of "romance" is a conspiracy of capitalism ... and then blatantly lying to Sato about spending time with his new girlfriend. (In another episode, Sato eavesdrops on Kaoru's girlfriend, where she denies having feelings for Kaoru.)

Bottom Line: Welcome to the NHK never forgets that its characters are damaged people. They want to fit in, they want to be loved, they want to be part of society ... but their shame and their guilt has turned them into outcasts. When there's humor, we're invited to laugh with the characters, not at them. And when there's drama, it's genuine. This anime is highly recommended to anyone who's ever been afraid of what other people think of them.

Recommendation: If you wish anime would tone down the inside jokes, and instead if it would crib notes from Kevin Smith, Judd Apatow, or Patton Oswalt, you should watch Welcome to the NHK. It's a series for the otaku in all of us -- whether you know what an otaku is, or not.

Norman Rafferty denies ever having used his eBay account to bid on Final Fantasy 9 doujinshi.

"Welcome to the N.H.K. Collection, Part 1" includes the first 12 episodes of the TV series.