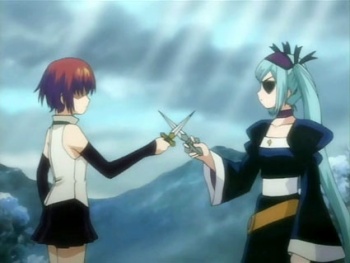 Let me start out by establishing something: I've grown tired of the typical "action" anime. The story is predictable, the antagonists are dumb, the protagonists are dumber, and every fight devolves into attack-calling spam wars complete with exploding buildings, incomprehensible philosophical banter, and plenty of pillars to crash through. Thus, it was to my great surprise and delight that Venus versus Virus is none of these things.

Venus versus Virus is a 12-episode anime series produced by Studio Hibari that originally aired in 2007. The basic premise is thus: Evil beings known as "viruses," formed when the soul (referred to as "fragment") of a human is drained out of them, can only be seen by certain people who posses "the sight." The viruses are drawn to the power of these gifted people. To stop them, the aloof, revolver-and-eye-patch-sporting Lucia, along with her adoptive father Nahashi and chocolate-obsessed assistant Laura, forms the eponymous Venus Vanguard to hunt down the viruses.

During such a virus hunt, Lucia runs into Sumire, a shy and somewhat naive high school student, who gains the sight when she pricks her finger on a piece of Lucia's jewelry. While trying to defend Sumire, the high school student is hit by one of Lucia's anti-virus bullets, and suddenly overpowers and easily dispatches the virus before passing out. Nahashi's examination reveals that Sumire possesses a sort of "berserker-mode" triggered by anti-virus weapons, giving her tremendous physical strength and control over elemental magic. There is only one drawback - in berserker mode, she is unable to distinguish friend from foe.

Ostensibly, this is a shonen series, which is strange, because there are far fewer action scenes than you'd typically expect for this genre. This is probably to the series' credit, though, because while the animation is decent for the more mundane scenes, the action sequences are sadly lacking visually. The fight animations look awkward and bland, and the scenes generally look like they were animated six or seven years ago.

This is less of a problem than you might think, however, because Venus versus Virus isn't really about over-the-top fight scenes at all - it's about the relationship between Lucia and Sumire. Both characters get an unprecedented amount of character development for a series of this length. Much of the early story is spent on Sumire, as she overcomes her fear of fighting viruses and her inability to control her berserker state. Towards the midpoint, Lucia's backstory is explored, and she begins to open up to Sumire, allowing her cold, unfeeling disposition to change to one of more open friendship and trust. This is all developed in a way that is both believable and well paced - there were no instant character changes that seemed contrived for the narrative.

Venus versus Virus is not without its flaws, however. Perhaps the most obvious of these is Lucia's special ability; her left eye, normally hidden under her eye patch, is capable of great power once uncovered. How this power works is never explained, though, and it tends to do whatever is convenient to resolve an episode's plot. It also takes some time for the "action" portion of the plot to get moving; the real villains behind the Viruses don't even begin to reveal themselves until nearly halfway through the series in episode five.

Despite being full of bad-guy clichés (really, does absolutely every villain have to laugh maniacally?), Lucif - the main antagonist of the series - generally manages to appear intelligent. I say "appear" here because the anime rarely shows anything from the viewpoint of the villains, and when it does it's only for a few short minutes where some hints may be dropped to Lucif's overall plan. This actually works to the benefit of the show, though - another series would likely just present the whole evil plan outright, and the viewer would be left to scream at the television for the next three episodes while the protagonists plod dumbly through obvious clues only to - surprise! - fall right into the trap anyway.

Perhaps my biggest problem with Virus is that the end is quite abrupt. The series ends in the middle of the last fight, without any sort of epilogue. I suppose the writers were trying to be poetic about it, and to some extent they succeeded. Still, it was incredibly frustrating to not get any sort of closure.

Bottom Line: All told, Venus versus Virus isn't the greatest anime series ever to end up on my desk, but it's still enjoyable. There are certainly things it could have done better, but overall, the believable, well-written characters and story outweigh the series' more aesthetic shortcomings.

Recommendation: If you're looking for a more unconventional, character-driven action anime, you would be remiss to not look into Venus versus Virus. Just don't be too surprised if the animation leaves something to be desired.

Despite his hopes to the contrary, Josh Viel is quite certain that if he ever had to wear an eye patch, the story behind it would not involve "I have awesome superpowers."