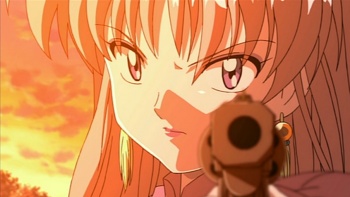 The best way to sum up Moeyo-Ken would be with one great big 'meh'. It's not that the series is bad, it just isn't particularly entertaining - funny at times, but not quite funny enough to justify watching. Moreover, much of the humor is tired, situational gags that have been beaten to death; hot spring shenanigans, under-developed breasts, love potions, and no comedy would be complete without the classic boy-turning-into-a-girl routine. This brand of humor at times makes the viewer feel quite awkward, and invokes a bounty of facepalm-worthy moments.

The story itself isn't awful, only practically irrelevant - to be fair, this isn't exactly the sort of anime you watch for the story. Moeyo-Ken takes place in Kyoto, Japan, in an alternate Meiji Era: A new law allows monsters to become licensed and live as Japanese citizens, in order to enforce this law the government established a group called the Mobile Shinsengumi. The organization is made up of three young girls, each of whom were fathered by members of the original Shinsengumi, and the president Ms. Oryou, who is somewhat of a mother figure to the team.

The group faces many challenges, including monsters that refuse to give up the old ways and the Tsubame Squad, who opposes the new government. Their biggest obstacle however, is debt. To help ease their financial difficulties Ms. Oryou's son Ryuunosuke returns home from his education in Shanghai. Much to the dismay of his mother, Ryuunosuke intends to return to Shanghai once his work in Kyoto is completed. Of course, the three girls of the Mobile Shinsengumi will do all that they can to ensure he stays. If the all female cast with a male protagonist didn't make it painfully obvious, the series largely focuses on Ryuunosuke and the girls, which for some odd reason, pine for him.

The characters themselves are quirky and a pleasant departure from the norm. Unfortunately, much of their charm is lost amidst the constant attempts at humor, most of which fall flat. The story and any sort of pacing also take a backseat to the silliness. This brings us to one of Moeyo-Ken's largest problems: It seems confused.

The series lays somewhere in the middle grounds of drama, comedy and over-the-top parody. The end result is something neither engaging nor very humorous that left me constantly checking my progress bar in hopes that it would soon end. Though, it would be fair to assume Moeyo-Ken's antics are more effective with a viewer who hasn't seen all its jokes before in countless other shows.

From a technical standpoint, the animation is smooth and very well done. Initially, I didn't care much for the visual style, finding to be a bit too giant-eyed and cutesy for my liking, but it's so well executed that it quickly grows on to you. Also, it was incredibly refreshing to watch an anime that didn't rely heavily on CG effects as so very many do these days. However, not all is well on the production front either: The voice acting is atrocious.

The voicing takes the awkwardness created by the juvenile, slapstick humor to a new level. In fact, it's so awful the viewer may find themselves quickly pressing 'mute' if someone were to walk into the room out of sheer embarrassment. The voices just don't seem to fit the characters: most of the cast members either sound like smoky old hookers or castrated young boys. In that light, the dub is spot on as it near perfectly matches the original Japanese audio. The only significant difference between the two audios is that you can actually tell Ryuunosuke is a male in English.

Though seldom entertaining, Moeyo-Ken neither good nor bad, just boring and hollow. While I may come off as fairly negative, overall I was generally indifferent to the series - though this may say more for my experience as a viewer than it does about the series itself. Those who are new to anime will likely find it enjoyable enough, and fans of Ranma ½ should appreciate the character designs and some of the humor. It could be a decent series for younger viewers; however some could find its humor a bit too perverted for such an audience.

In the end, when dealing with a genre that is so ridiculously oversaturated with titles, there's no good reason to watch Moeyo-Ken.

Bottom Line: While occasionally funny, Moeyo-Ken doesn't exactly stand out in crowd. Despite likable character designs and an interesting story, the constant barrage of poor attempts at humor drag the series down. It often is tedious, and leaves you feeling empty.

Recommendation: If you're new to anime you might enjoy this, but you're better off going with something else. Diehard Ranma ½ fans should like it. Everyone else should just forget it exists, and let it become lost in the plethora of similar comedy titles.

Salvan Bonaminio had the strangest craving for cabbage after watching Moeyo Ken.